Jul 5, 2020 9:35 PM PHT
Sofia Tomacruz
Facebook Twitter Copy URL
Copied
One of the provisions of the highly controversial law expands the scope of offenses to cover people outside Hong Kong, even if they are not permanent residents of the Special Administrative Region 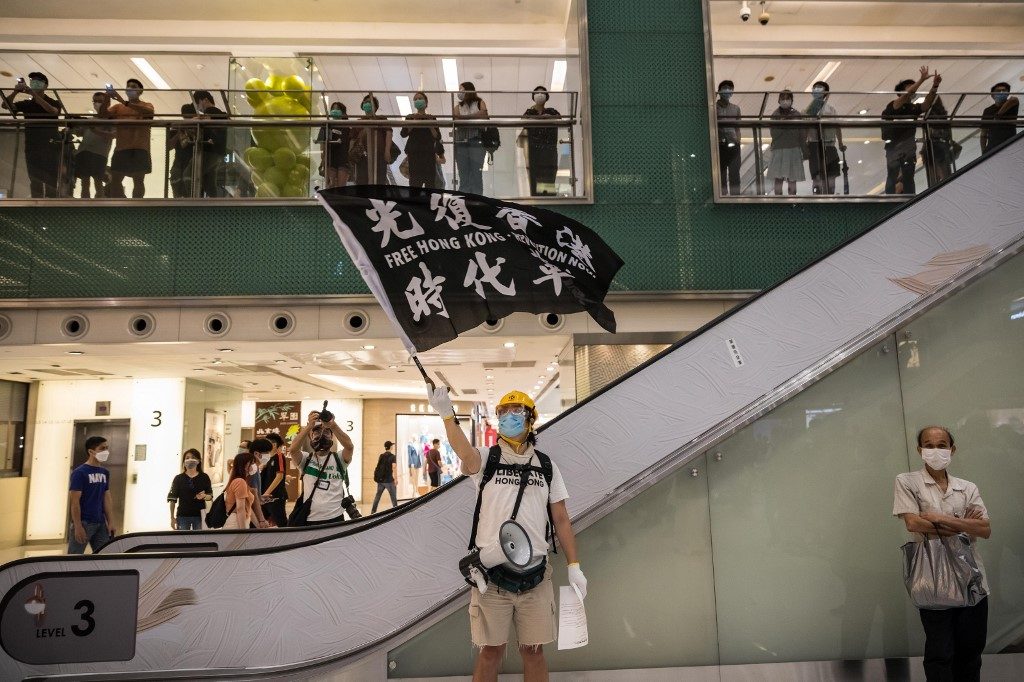 MANILA, Philippines – China’s controversial security law recently imposed on Hong Kong is sweeping not only in its power over the harbor city but even in its reach, casting a wide net that covers individuals outside Hong Kong among those who can face punishment for vaguely defined political crimes.

The contentious new law, which was unveiled on June 30, includes a provision that suggests foreigners who support calls for Hong Kong’s independence or back sanctions to be imposed on the Chinese government could face prosecution.

Article 38 states: “This Law shall apply to offenses under this Law committed against the Hong Kong Special Administrative Region from outside the Region by a person who is not a permanent resident of the Region.”

“I know of no reason not to think it means what it appears to say: it is asserting extraterritorial jurisdiction over every person on the planet…. If you’ve ever said anything that might offend the PRC (People’s Republic of China) or Hong Kong authorities, stay out of Hong Kong,” Donald Clarke of the George Washington University Law School wrote in an analysis piece.

1/ The new national security law covers not only Hong Kong citizens but also foreign citizens. Given its loosely defined terms, the law is prone to misuse or political manipulation. https://t.co/0aHKCrri1r

Aside from this, under Article 54 of the law, foreign media and international non-governmental organizations (NGOs) may also face stricter “management” in the global financial hub.

Can this really happen? New York University law professor Jerome Cohen, who specializes in the Chinese legal system, said in his blog that it will depend on the interpretation of China’s National People’s Congress Standing Committee (NPCSC).

While the full effects of the measure have yet to be seen, Cohen pointed out that the international community is “likely to reject any attempt at such a claim as another PRC violation of public international law.”

Cohen then said that as the NPCSC interprets Article 38, it would “undoubtedly” consider Chinese criminal law which says that “foreigners may be punished if their acts have a certain level of seriousness…and if those acts are also punishable in their own country.”

The level of seriousness of acts, he added, will be those “such as that of similar offenses in China that call for at least 3 years of punishment.”

But more than individuals themselves, Thomas Kellogg, executive director of the Center for Asian Law at Georgetown University, said restrictions may be most felt among NGOs.

“The law’s broad extraterritorial scope could well have a chilling effect on overseas NGOs, limiting their ability to partner with Hong Kong groups on sensitive issues like human rights and political reform,” Kellogg said in a New York Times interview.

How has the world reacted? As the law took effect immediately after it was made public on June 30, the United States, Canada, and Britain, among others, swiftly denounced the bill as China’s attempt at a “takeover” of Hong Kong.

Mere days after the bill was enacted into law, a wave of fear washed over the city as democracy books disappeared from libraries, key pro-democracy parties disbanded, and individuals purged social media accounts and electronic devices of information that may be used as evidence against them.

“[The security law] is a complete destruction of the rule of law in Hong Kong and threatens every aspect of freedom the people of Hong Kong enjoyed under the international human rights standards or the Basic Law,” Lee Cheuk Yan, a veteran Hong Kong politician and activist, told American lawmakers.

The Hong Kong Bar Association added its voice to opposition against the measure, warning that the national security law “undermines the semi-autonomous city’s independent judiciary and stifles freedom.”

Hong Kong police have arrested at least 300 people after crowds took to the streets in defiance of the measure last July 1.

“All in all, this is a takeover of HK,” Cohen said. – with reports from Agence France-Presse/Rappler.com