Jul 13, 2020 9:27 AM PHT
Agence France-Presse
Facebook Twitter Copy URL
Copied
The pressure to reopen schools comes from the top, with Trump threatening to withhold federal funding from schools that refuse to reopen 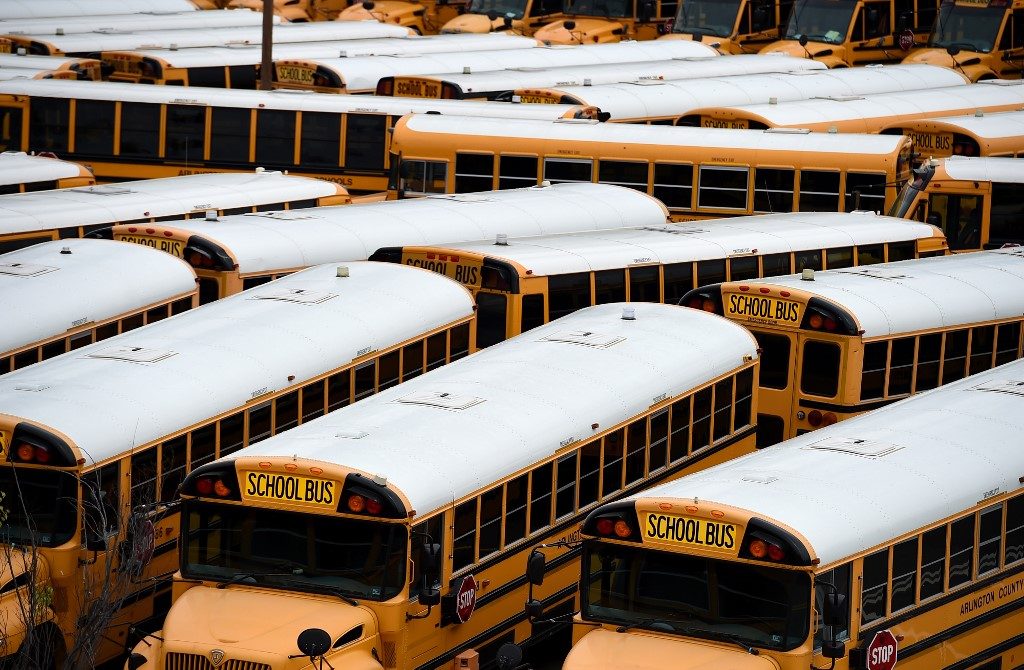 WASHINGTON, DC, USA – The Trump administration on Sunday, July 12, again pressed for full school reopenings in the fall, even as resurgent COVID-19 infections and a record spike in cases in Florida raised mounting questions about the risk of a premature return to classes. (READ: How other countries are reopening schools during coronavirus pandemic)

With the virus setting new records by the day in many parts of the country, a top health official warned that “everything should be on the table” and even US President Donald Trump wore a mask in public for the first time.

Florida has been especially hard hit. The southeastern state reported 15,299 new cases in a single day, the highest one-day total of any state to date – and more than all the cases yet registered in South Korea.

But in two television interviews Sunday, Education Secretary Betsy DeVos insisted on the need for schools to reopen, even as several states were registering record numbers of coronavirus cases and hospitals in many cities were struggling to cope.

Yet, another administration spokesman cautioned Sunday that some areas might need to return to lockdowns.

Admiral Brett Giroir, the assistant secretary of health, said that with COVID-19 deaths continuing to rise, “everything should be on the table.”

“We’re all very concerned,” Giroir added on ABC’s “This Week,” as he called for the re-closing of bars, greater spacing in restaurants and the near-universal wearing of masks in the areas most afflicted, largely in southern states that reopened aggressively.

The pressure to reopen schools has come from the top, with Trump threatening to withhold federal funding from schools that refuse to reopen – a stance that DeVos reconfirmed.

Trump has criticized guidelines from the federal Centers for Disease Control for the safe reopening of schools, saying they were too rigid and too expensive.

But many school systems say the safety of millions of students, teachers and staff can be ensured only with some combination of remote and in-person schooling – or in some cases remote-only teaching – and that a fully in-person approach, to be safe, would impose extreme costs.

DeVos was pressed as to whether the government would actually withhold federal funds from schools, which generally account for around 10% of local school budgets – a substantial contribution at a time when reopening costs for larger school systems can run to the millions. (READ: Thousands of schools reopen as France eases coronavirus lockdown)

“There is no desire to take money away,” she said on CNN. “In fact, we want to see schools open and have been committed to ensuring the resources are there to do that.”

But in a Fox News interview, she was more direct, explicitly saying that if school don’t reopen, they should not receive federal funds.

That drew a sharp retort from a top Democrat, House Speaker Nancy Pelosi, who called DeVos’s remarks “malfeasance and dereliction of duty.”

“They are messing with the health of our children,” she said on CNN.

“We all want our children to go back to school. Teachers do, parents do, and children do. But they must go back safely.”

The surge in coronavirus cases has pressed some governors in hard-hit southern states to retreat from their earlier efforts to reopen their economies, with some now embracing the wearing of masks.

Governor John Bel Edwards of Louisiana, a Democrat, on Saturday imposed a mask-wearing requirement for most circumstances and ordered bars re-shuttered.

Trump on Saturday wore a mask in public for the first time during a visit to the Walter Reed National Military Medical Center in Bethesda, Maryland, after downplaying the practice for months in defiance of his health advisors.

Surgeon General Jerome Adams, in a reversal of tone, wore a protective mask during a television appearance Sunday, and Giroir separately emphasized the importance of masks.

“For this to work we have to have 90% of people wearing masks in public in the hot spot areas,” Giroir said.

“If we don’t have that we won’t get control of the virus.

The United States is the hardest-hit country in the world, with around 135,000 deaths and more than 3.2 million confirmed cases. Seven states set one-day death records this week.

Intensive care units in many hospitals are operating close to capacity, and there were reports in Arizona of local authorities procuring refrigerated trucks because morgues were being overwhelmed.

Giroir stressed that progress is being made in some areas, with more testing and new treatments available.

But amid the record-setting rise in cases, he acknowledged that “we expect deaths to go up over the next two, three weeks before this turns around.”

The administration is preparing for a challenging time in the fall, Giroir said, with the coronavirus likely resurging even as flu returns.

“There are some data that you can get both at the same time,” he said.