Jul 13, 2020 1:47 PM PHT
Agence France-Presse
Facebook Twitter Copy URL
Copied
Despite the controversy over Park Won-soon's death, the Seoul City government organizes a 5-day funeral for him and sets up a memorial altar outside City Hall 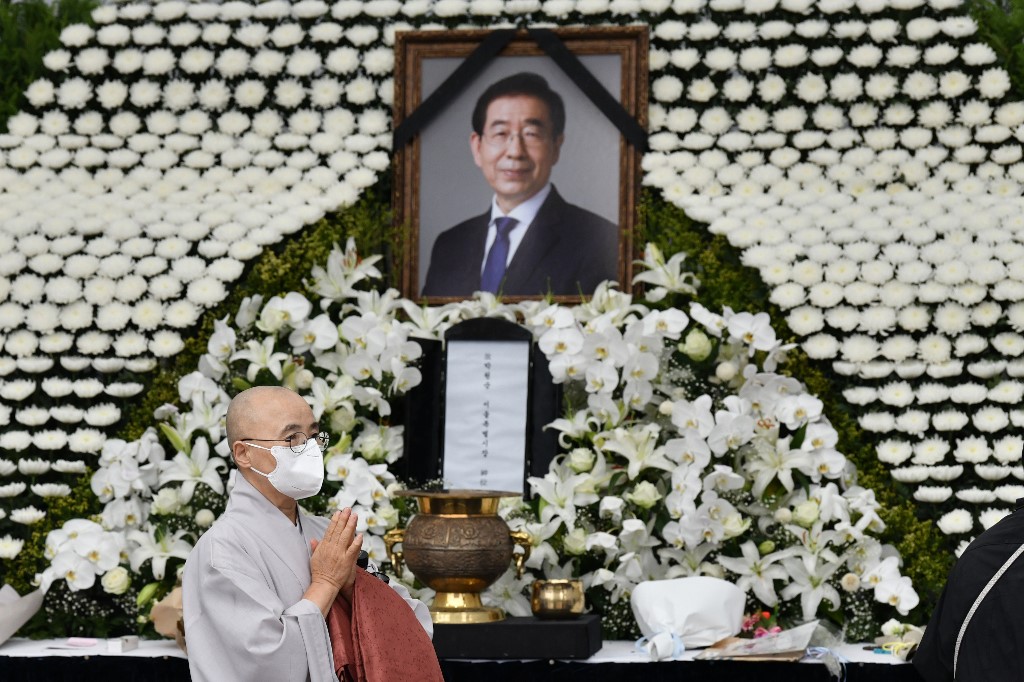 SEOUL, South Korea – The funeral service for Seoul mayor Park Won-soon, who took his own life after being accused of sexual harassment, was held Monday, July 13, despite a petition against the city-run ceremony signed by half a million people.

Former human rights lawyer Park was a heavyweight figure in the ruling Democratic party and ran South Korea’s sprawling capital – home to almost a fifth of the national population – for nearly a decade.

He was found dead on a mountain Friday, a day after his former secretary filed a police complaint against him, widely reported to involve sexual harassment.

Despite the controversy over his death, the Seoul City government organized a five-day funeral for Park – two days longer than the normal Korean ritual, which begins on the day of death – and set up a memorial altar outside City Hall.

More than 20,000 people came to pay their respects during the mourning period, and at the service on Monday his daughter said: “I could feel my father’s joy as I met the citizens one by one.”

But an online petition on the presidential website opposing the ceremony garnered more than 500,000 signatures.

“Does the public have to watch the fancy five-day funeral of a powerful politician who took his own life over sexual harassment allegations?” the petition asked.

“What kind of message is this trying to send?” it added.

Park is by far the most high-profile politician to be implicated in a harassment case in South Korea, a highly patriarchal society that has seen a widespread #MeToo movement in the last two years.

President Moon Jae-in sent flowers to the funeral and his chief of staff attended personally, as did other senior officials of the centre-left Democratic party.

But neither the acting leader of the main conservative opposition United Future party nor the leader of the centrist People’s party Ahn Cheol-soo did so.

“I decided not to pay my respects,” Ahn wrote on his Facebook page.

“Now is the time when deep reflections on the perceptions and behaviours of… high-ranking officials in this country are needed more than ever.”

Around 100 people attended the service — where numbers were limited because of the coronavirus pandemic — on Monday, the final day of the funeral.

Afterwards Park’s body was to be cremated and taken to his hometown in South Gyeongsang province.

Park’s death means the investigation into the case will automatically be closed and his supporters have sought to identify the woman who complained, blaming her for his death.

“It is questionable if a city funeral is a proper step,” an editorial carried by the Korea Herald said.

The official ceremony “gives the impression that Park deserves respect and looks innocent”, it added.

South Korea’s #MeToo movement has brought down scores of prominent men in multiple fields, with perpetrators including a former provincial governor who sought the presidency in 2017.

That politician was jailed last year for sexual intercourse by abuse of authority after his female assistant accused him of repeatedly raping her. – Rappler.com