Jul 13, 2020 10:30 PM PHT
Agence France-Presse
Facebook Twitter Copy URL
Copied
'I am ready to face the new challenge and succeed for my son, my family, my people and my country. Nobody can rewrite history. This is a price of freedom,' says President Hashim Thaci, who was charged for war crimes in June 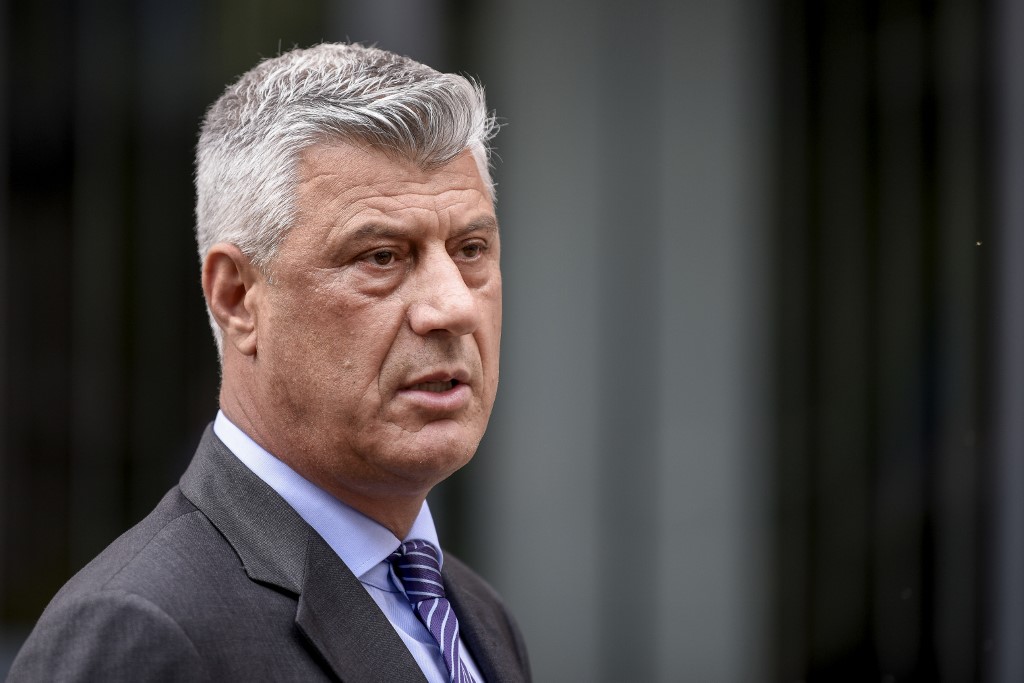 THE HAGUE, Netherlands – Kosovo President Hashim Thaci arrived on Monday, July 13, for questioning by war crimes prosecutors in The Hague, saying that “nobody can rewrite history” over his role in the 1990s war.

Thaci, 52, was indicted by a special tribunal in late June for war crimes and crimes against humanity in the 1998-99 conflict with Serbia that won the province its independence. (READ: Kosovo’s Thaci accuses international justice of ‘rewriting history’)

Thaci and others are charged with being “criminally responsible for nearly 100 murders” in addition to other crimes against Serb, Roma and Kosovo Albanian victims while he was leader of the rebel Kosovo Liberation Army (KLA).

“Today I am here to respect what I dreamt and fought for, a free independent Kosovo based on equal rights, multi-ethnic society and rule of law,” Thaci told reporters outside the Kosovo Specialist Chambers.

“I am ready to face the new challenge and succeed for my son, my family, my people and my country. Nobody can rewrite history. This is a price of freedom.”

Around two dozen Thaci supporters gathered outside the court for his arrival, chanting his name, holding up Kosovo flags and waving banners with slogans including “Hashim is not simply a name – it is a symbol of an honorable epoch.”

A spokesman for the prosecutors at the court declined to comment when asked by Agence France-Presse (AFP) for details of the questioning.

A number of Thaci’s former KLA colleagues have previously been interviewed by the court.

President since 2016 and prime minister before that, in recent years Thaci has taken part in talks aimed at normalizing ties with Serbia, which still rejects the independence of its former province.

“Kosovo is a success story, I am very proud,” Thaci said before entering the heavily secured court building.

“I believe in peace through reconciliation and justice. I believe in dialogue and relations with all nations.”

A judge will decide later this year whether to formally charge Thaci, Kosovo’s most powerful politician.

He has previously said he would resign if the charges were confirmed, insisting he is innocent.

He said on Sunday before his departure for The Hague that “our war was clean and just” and that “Kosovo was a victim”.

“It’s true that we violated the laws of Slobodan Milosevic,” he said referring to Serbia’s former leader. But that was something he was proud of, he added.

The Kosovo conflict, which claimed about 13,000 lives – most of them Kosovo Albanians – was only ended when NATO forces launched a bombing campaign against Serbia that forced them to quit the territory.

After the 1990s war, several Serbian military and police officials were convicted of war crimes.

Milosevic died in custody in The Hague in 2006 while awaiting trial by a UN-backed tribunal.

But KLA rebels have also been accused of coordinating a campaign of revenge attacks on Serbs, Roma and ethnic Albanian rivals during and after the war.

Among the others indicted last month were Thaci’s closest political ally Kadri Veseli.

The charges were announced as Thaci was preparing to fly to the United States for a meeting with Serbian representatives, a meeting which had to be postponed until Sunday in Brussels. – Rappler.com