Jun 30, 2013 6:22 PM PHT
Facebook Twitter Copy URL
Copied
Indonesia is the only member which has still not ratified an ASEAN Agreement on Transboundary Haze Pollution brokered in 2002 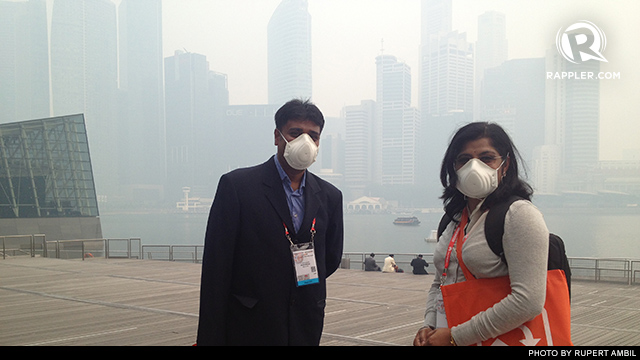 Thick grey smoke from the fires on Sumatra Island sent air pollution to record levels in neighboring Singapore and Malaysia this month, forcing people to wear face masks and schools to close.

The crisis prompted the two nations to raise the problem at the annual Association of Southeast Asian Nations foreign ministers’ meeting in Brunei on Sunday.

Indonesia is the largest member of the 10-nation bloc.

“We… stressed the importance for regional countries to uphold their international obligations and work together to tackle the transboundary haze pollution problem,” the foreign ministers said in a joint statement.

They “called upon ASEAN member states that have not yet ratified and operationalized the (treaty) to do so expeditiously”.

Indonesia is the only member which has still not ratified an ASEAN Agreement on Transboundary Haze Pollution brokered in 2002.

It also binds signatories to “respond promptly” to requests for information sought by another country affected by the smoke and to take steps to implement their obligations under the treaty.

Indonesia, a freewheeling democracy since the fall of strongman Suharto in 1998, has blamed its parliament for the long delay.

The government had sought legislators’ approval to ratify the haze agreement but the proposal was rejected in 2008.

Indonesia Foreign Minister Marty Natalegawa said the treaty had been resubmitted to the current legislature, although no timeline for ratification was given.

Environmental group Greenpeace International, however, said Indonesia was reluctant to ratify the treaty because it would affect the expansion plans of palm oil companies in the country.

The Sumatra fires have been largely blamed on palm oil firms using the illegal but cheap method of burning vast tracts of rainforests and peat lands to clear them for planting.

Indonesia is the world’s top producer of palm oil, which is used for many everyday items such as soap and biscuits.

Some of the world’s most biodiverse rainforests cover vast areas of Sumatra and other parts of the sprawling Indonesian archipelago.

But environmental campaigners warn these forests are being cleared at a disastrous rate to make way for palm oil plantations, as well as for mining and logging.

Singapore Foreign Minister K. Shanmugam voiced satisfaction at progress on the haze issue at the talks.

“It gives a framework for us to move ahead.”

However Greenpeace’s chief Indonesia forest campaigner, Bustar Maital, said ASEAN must widen its focus to prevent the rapid rate of deforestation in Indonesia and across the region, rather than simply focus on the fires.

“Deforestation is the main driver of the forest fires,” he told AFP. – Rappler.com