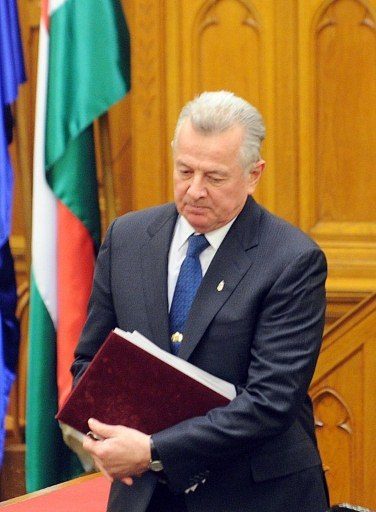 BUDAPEST – Hungary’s President Pal Schmitt, a close ally of Prime Minister Viktor Orban, caved in Monday, April 2, to mounting pressure to quit after he was stripped of his 1992 doctorate title for plagiarism.

“Under the constitution, the president must represent the unity of the Hungarian nation. I have unfortunately become a symbol of division, I feel it is my duty to leave my position,” Schmitt told parliament.

He later submitted his resignation in writing to the speaker of parliament, Laszlo Kover.

“In the interests of Hungary and of national unity, I resign from the post of president,” he said in the letter.

Schmitt, 69, a former two-time fencing Olympic champion, leaves the mostly ceremonial post less than 2 years after he took over the presidency in June 2010.

Rumors he might resign first arose on Friday, a day after Budapest’s Semmelweis University stripped him of his PhD, but Schmitt clung on, insisting that he could “see no link” between the plagiarism affair and a need for his resignation.

The university found last week that Schmitt copied “word-for-word” large passages of another writer’s work in his thesis on the history of the Olympic Games.

In parliament Monday, Schmitt insisted he had done “honest work” and claimed the university had “no right” to strip him of his doctorate, adding that he might take legal action to get it back.

He also said he would prepare a new doctorate on sports and the environment.

The ruling Fidesz party, which enjoys an overwhelming majority in parliament, said it would initiate talks with the opposition on Monday evening on the exact procedure for choosing a new president.

Hungary’s constitution provides for the election of a new president within 30 days if the head of state’s mandate ends prematurely. During this time the speaker of parliament takes over the president’s tasks.

Schmitt’s successor is widely expected to be another close ally of Orban’s centre-right Fidesz party.

During his time in office, the outgoing president signed into law numerous bills, as well as a new constitution, that critics at home and abroad have condemned for handing increasing power to the ruling party and restricting democracy.

Opposition parties welcomed Schmitt’s departure Monday, but hinted that a change in the way the president is chosen — at present he or she is elected by parliament, not by the Hungarian people — could be needed.

“The presidential honour has been so greatly undermined that a mere change of presidents will not do,” said far-right Jobbik leader Gabor Vona.

“The only way to restore confidence is to have immediate (direct) presidential elections.”

Others also saw Schmitt’s departure as a sign that Orban’s power was waning.

“This should be a sign for the prime minister as well, that his will, his power is not limitless. The people’s backbone is stronger than the PM’s will,” said Socialist party leader Attila Mesterhazy.

“Your leader is not immune to mistakes, and that sets limits to your powers as well,” he told Fidesz deputies.

Since coming to power in April 2010 in a landslide election victory, Orban’s government has installed close allies in key posts such as the presidency, the state audit office and the judiciary.

Orban had mostly stayed out of the debate over Schmitt, telling public radio Friday that the president alone must make the decision on whether he should resign, while opposition parties had called on him to step down.

The weekly HVG first outed Schmitt in January, reporting that the “majority” of his thesis was a “word-for-word translation” of a text written in French in the 1980s by late Bulgarian sports expert and diplomat Nikolai Georgiev.

Soon after, respected news website index.hu said a further 17 pages of Schmitt’s conclusions had been word-for-word translations of a dissertation by German professor Klaus Heinemann, written in English in 1991.