How about Myanmar’s ethnic conflict? 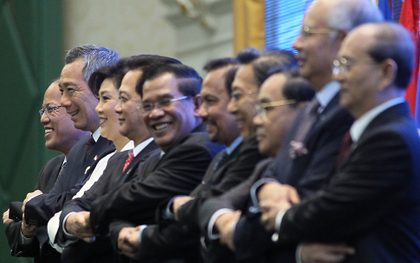 MANILA, Philippines- While historic, the elections in Myanmar on April 1- which saw the participation and victory of democracy icon Aung San Suu Kyi – is not the sole symbol of Myanmar’s transformation. Southeast Asian parliamentarians said the regional leaders should also use their ongoing summit in Phnom Penh, Cambodia, as a platform to discuss Myanmar’s insufficient response to ethnic violence.

The Asean began its 2-day summit on Tuesday, April 3. It brings together leaders from the Philippines, Thailand, Indonesia, Cambodia, Vietnam, Malaysia, Brunei, Singapore, Laos and Myanmar.

The AIPMC said that hundreds of thousands of refugees still live in camps outside Myanmar. Hostilities between government troops and armed groups such as the Kachin Independence Army (KIA) and the Karen National Liberation Army have driven many people to flee the country.

The Christian Science Monitor reported that 3 constituencies in the state of Kachin were not able to take part in the by-elections on April 1 because of the tension.

The KIA has been in conflict with the military in Myanmar since 1961, when then Gen Ne Win moved to establish the junta’s control over the Kachin people – which is composed of 6 tribes – in northern Myanmar.

The Karen National Liberation Army, on the other hand, has been fighting the military junta since 1949; the rebels want the Karen tribe, who live in the southern and southeastern parts of Myanmar, to gain independence.

Not on Suu Kyi alone

The AIPMC also raised the plight of the Rohingyas, a Muslim ethnic group known to be persecuted in Myanmar. Many Rohingyas have fled to Bangladesh and Thailand, where they also grapple with problems of unemployment and poverty.

The AIPMC said that while they celebrate Suu Kyi’s reported win and the rise of her party, the National League for Democracy, it noted that the latter holds only a few seats in the parliament, which is still dominated by members of the Union Solidarity and Development Party (USDP).

The USDP is the party of the military junta. In the by-elections on April 1, only 45 out of Myanmar’s 664 seats in parliament were up for grabs.

The AIPMC said the international community and the Asean are still key to exerting pressure on the military junta to cause changes in Myanmar.

“As we have seen across the region, we cannot always rely on individuals, no matter how well meaning they may seem. We have to have the laws that protect us, as people can be changed and turned by power. When you change to a new political system, there will necessarily be many legal loopholes, and these holes must be plugged as quickly as possible. You must strengthen the systems and you have to neutralize the power of the army,” said Son Chhay, a parliament member in Cambodia.

The network of parliamentarians also pushed for the review of Myanmar’s 2008 constitution, which was ratified after Cyclone Nargis devastated Myanmar and killed 140,000 people. Critics say the charter allows the military – which has been linked to human rights abuses – to go unpunished.

The Asean however does not intervene in the domestic issues of its member-countries, in accordance with its principle of non-interference.- Rappler.com