Jul 13, 2013 7:07 PM PHT
Facebook Twitter Copy URL
Copied
(UPDATED) The company says the switch had been checked on July 4 and that it was immediately ordering checks of some 5,000 similar joints on its network 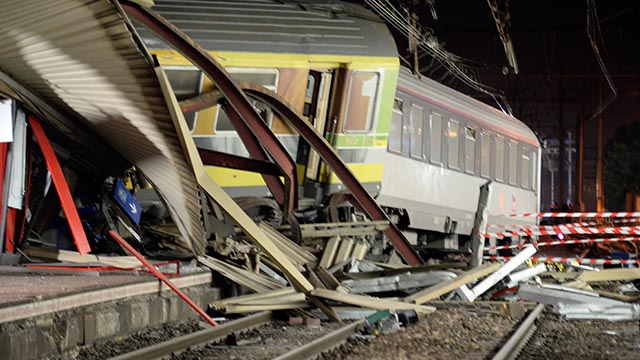 PARIS, France (UPDATED) – A train derailment near Paris that killed six people was caused by a fault in the tracks, France’s state rail company said on Saturday, July 13, as the transport minister urged upgrades to aging regional lines.

The SNCF said the derailment on Friday, which also left dozens injured, was caused by a connecting bar that had come loose at a rail switch at the station at Bretigny-sur-Orge, about 25 kilometres (15 miles) south of Paris.

The joint bar “broke away, it became detached and came out of its housing,” said Pierre Izard, the SNCF’s general manager for infrastructure.

It “lodged itself at the centre of the switch, prevented the normal progression of the train’s wheels and seems to have caused the train’s derailment,” he said.

The company said the switch had been checked on July 4 and that it was immediately ordering checks of some 5,000 similar joints on its network.

“We have decided to check equipment of this nature on the entire network and are starting now,” SNCF chief Guillaume Pepy said.

Transport Minister Frederic Cuvillier said human error was not to blame for the accident, praising the train’s driver who he said “had absolutely extraordinary reflexes by sending the alert immediately”, preventing a collision with an oncoming train.

But he said France’s regional rail lines were out of date, after the SNCF focused much of its attention in recent years on high-speed TGV lines.

“We cannot be satisfied with rolling stock that is 30 years old,” Cuvillier said, adding: “The situation is severe, with the deterioration in recent years of traditional lines because of a lack of resources.”

A railway passenger association also denounced what it called “rust-bucket trains” and the practice of coupling different types of trains together, demanding proper inspections.

A minute of silence was held at noon (1000 GMT) Saturday on all French trains and in all stations for the victims of the accident, which took place as many were leaving for summer holidays ahead of the Bastille Day holiday on Sunday.

A source close the investigation said the dead were four men and two women, aged between 19 and 82.

In what officials described as a “catastrophe”, the train came off the tracks and crashed into the station platform at 5:14 pm Friday, as it travelled at 137 kilometres (85 miles) per hour on its way from Paris to the west-central city of Limoges.

Four carriages of the train jumped the tracks, of which three overturned. One carriage smashed across a platform and came to rest on a parallel track; another lay half-way across the platform. There were 385 passengers on the train.

The local prefect’s office said six people had been killed and nine seriously injured, including two in critical condition. Health officials said at least 50 people had been treated for injuries.

Rescuers worked throughout the night searching for victims potentially trapped in overturned carriages, but the prefect’s office said no more were expected to be found.

Autopsies were to be conducted on the bodies of the dead on Saturday.

The SNCF, judicial authorities and France’s BEA safety agency were each carrying out separate investigations of the accident.

Witnesses said the crash site resembled a war zone, with 57-year-old passenger Marc Cheutin saying he had to “step over a decapitated person” to exit the carriage he had been travelling in.

Officials dismissed reports of a group of people pretending to be part of rescue efforts and attempting to steal from the victims.

Cuvillier said he was unaware of any reports of victims being robbed. He said one person was arrested for trying to steal a mobile phone from a rescue worker, but that it was an “isolated incident”.

The derailment was France’s worst rail accident since 2008, when a train collided with a schoolbus, killing seven schoolchildren. – Rappler.com