Aug 3, 2013 9:07 PM PHT
Agence France-Presse
Facebook Twitter Copy URL
Copied
The announcement comes a month after a historic ruling by the US Supreme Court which struck down a law denying federal benefits to homosexual couples 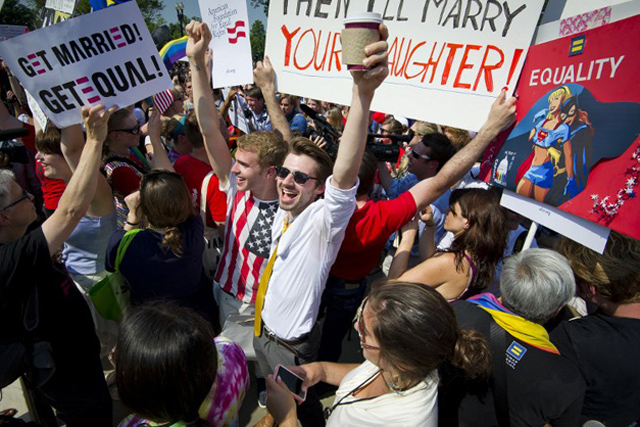 LONDON, United Kingdom – The United States is to extend the same visa privileges to gay married couples worldwide as those enjoyed by heterosexual couples, Secretary of State John Kerry said on Friday, August 2.

Speaking at the US embassy in London, Kerry said visa applications by same-sex spouses would be treated the same as those by heterosexual husbands or wives, as long as their marriage was recognised in the country where they wed.

The announcement comes a month after a historic ruling by the US Supreme Court which struck down a law denying federal benefits to homosexual couples.

Kerry said the State Department was “tearing down an unjust and an unfair barrier that for too long stood in the way of same-sex families being able to travel as a family to the United States”.

The change in visa rules will apply to same-sex spouses even if they are applying for a visa while in a country that does not recognise their marriage, he added.

The US government had announced last month that same-sex spouses could now apply for “green card” residency permits.

Rhode Island and Minnesota on Thursday became the 12th and 13th US states to legalise same-sex weddings, amid record support for gay marriage in the US.

Same-sex marriage is legal in 15 countries as well as 13 US states and parts of Mexico, while several countries recognise civil partnerships that give gay couples similar rights to those enjoyed by heterosexual spouses. – Rappler.com