Obama cancels US exercises with Egypt 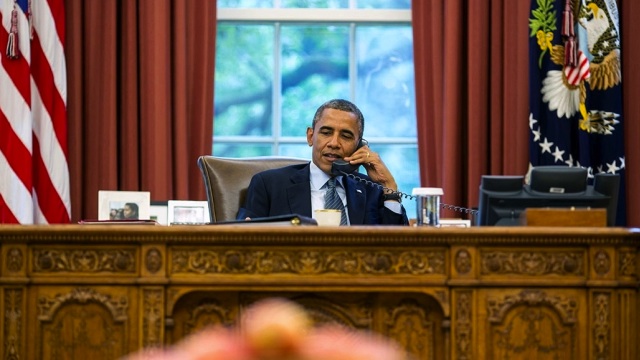 CHILMARK, USA – President Barack Obama said Thursday, August 15, that the United States has canceled military exercises with Egypt to protest the killing of hundreds of protesters.

“While we want to sustain our relationship with Egypt, our traditional cooperation cannot continue as usual when civilians are being killed in the streets and rights are being rolled back,” Obama told reporters at his vacation home on Martha’s Vineyard.

Obama said the United States informed Egypt it was suspending the Bright Star exercises, which has been scheduled every two years since 1981.

The exercises were also called off in 2011 as Egypt was in the throes of the revolt that overthrew longtime strongman Hosni Mubarak, a close US ally.

Egypt has been in turmoil since, with the army on July 3 ousting the country’s first democratically elected president, the Islamist Mohamed Morsi.

More than 500 people have died since Wednesday when Egyptian security forces, defying appeals for restraint by the United States and other powers, crushed pro-Morsi demonstrations.

Obama said that Morsi was “not inclusive” and that “perhaps even a majority” of Egyptians opposed the Muslim Brotherhood leader.

“While we do not believe that force is the way to resolve political differences, after the military’s intervention several weeks ago, there remained a chance for reconciliation and an opportunity to pursue a democratic path,” Obama said.

“Instead, we’ve seen a more dangerous path taken through arbitrary arrests, a broad crackdown on Mr. Morsi’s associations and supporters, and now tragically violence that has taken the lives of hundreds of people,” he said. – Rappler.com