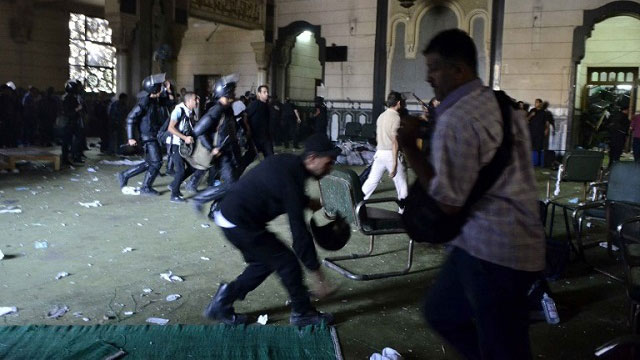 Further escalation could have “unpredictable consequences” for Egypt and its neighbors, the presidents of the European Council and European Commission said.

“This path will not succeed. It is crucial that violence ends immediately,” they said.

The 28-nation bloc would continue efforts to promote an end to violence, resumption of political dialogue, and return to a democratic process, the statement added.

“To this effect, together with its member states, the EU will urgently review in the coming days its relations with Egypt and adopt measures aimed at pursuing these goals.”

Senior diplomats from the 28 EU nations will Monday hold emergency talks on Egypt in Brussels in which they are expected to call for a snap meeting of foreign ministers within the next days.

The EU has pledged nearly 5 billion euros in loans and grants for Egypt for 2012-2013 and said shortly after the July 3 ouster of president Mohamed Morsi that aid provisions would be “under constant review” as the situation evolved.

“While all should exert maximum restraint, we underline the particular responsibility of the interim authorities and of the army in bringing clashes to a halt,” Van Rompuy and Barroso said.

“The calls for democracy and fundamental freedoms from the Egyptian population cannot be disregarded, much less washed away in blood.”

They regretted that international efforts and proposals for building bridges were set aside and confrontation chosen instead, and said there was no alternative to dialogue.

“All the Egyptian political forces must recommit to the country’s democratic future and engage in a political process leading to the early holding of elections and the establishment of a civilian government,” they said.

“The violence and the killings of these last days cannot be justified nor condoned. Human rights must be respected and upheld. Political prisoners should be released.”

The leaders of Germany and France, President Francois Hollande and Chancellor Angela Merkel, last week raised the spectre of the EU rethinking its cooperation with Egyptian authorities and called for a swift meeting of the bloc’s foreign ministers.

The next scheduled meeting of EU foreign ministers is in the Lithuanian capital, Vilnius, on September 6 and 7. – Rappler.com