Aug 21, 2013 6:37 PM PHT
Agence France-Presse
Facebook Twitter Copy URL
Copied
He was also quoted as saying that the 'charisma' shown by successor Pope Francis showed that the resignation was indeed 'God's will' 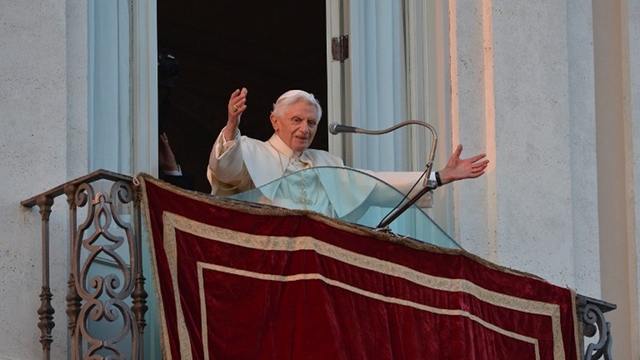 VATICAN CITY – Benedict XVI has said God told him to resign as pope and that his successor’s “charisma” reflected this divine inspiration, Catholic news agency Zenit has reported.

“God told me” to step down, the pope emeritus was quoted as saying by a visitor who met him recently, Zenit said in a report in Italian media on Wednesday, August 21.

The 86-year-old Benedict XVI, who has retained his papal name, now lives in a former monastery inside the Vatican walls and has made no public appearances.

He only very rarely meets with visitors, Zenit said.

Benedict shocked the world with his resignation announcement on February 11, when he said he was stepping down because he felt his weak physical and mental state no longer let him fulfill his duties.

Rumors of a serious illness were quickly denied by the Vatican, as was speculation that a far-reaching scandal over a series of leaks revealing intrigue in the Vatican had forced him to leave.

But Benedict was quoted by Zenit as saying he had a “mystical experience” in which he received a divine message that fostered the “absolute desire” to be with God in private prayer.

He was also quoted as saying that the “charisma” shown by successor Pope Francis showed that the resignation was indeed “God’s will”.

Benedict on Sunday visited the papal summer residence of Castel Gandolfo for a short walk in its sprawling grounds but otherwise lives in virtual seclusion.

Francis has said Benedict is like “a live-in grandfather” and informed sources say he regularly consults his predecessor. – Rappler.com