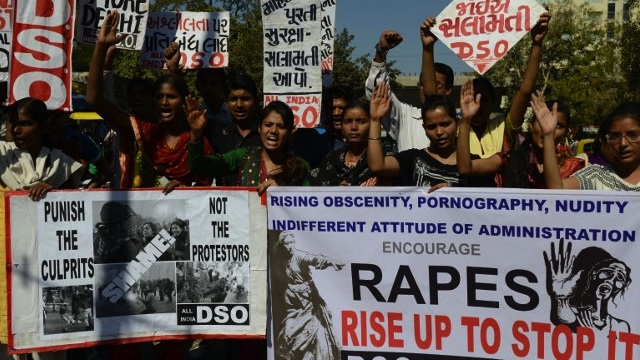 MUMBAI, India – A young photographer gang-raped in Mumbai last week in an attack that sparked outrage has been discharged from hospital after “improving steadily”, staff said Wednesday, August 28.

The 22-year-old woman was assaulted while on assignment for a magazine in central Mumbai with a male colleague, who was tied up and beaten, police say.

The woman was admitted to the city’s Jaslok Hospital with internal and external injuries after the attack last Thursday evening.

“The patient had improved steadily and our team of doctors especially assigned… had declared the patient medically fit for discharge yesterday evening,” the acting head of the hospital said in a statement.

Also on Wednesday, police took the five arrested suspects in the case to the crime scene at an abandoned mill compound to reconstruct events.

Footage showed the accused, dressed in T-shirts and jeans and wearing hoods, being escorted by police to the scene.

“They demonstrated the sequence in which the crime was committed. We are seeking to build a strong and waterproof case against them,” Joint Commissioner of Police Himanshu Roy told television reporters.

Police have said the accused are aged between 18 and 27, but local media reported Wednesday there were city records to back up claims that one suspect is a juvenile.

“We will do a bone ossification test to determine whether he is a minor. If a minor, proceedings will be taken against him in a juvenile court,” said Roy.

Formal charges have yet to be filed.

Police arrested the suspects within three days of the incident that shocked Mumbai, which has long been regarded as one of the safer cities for Indian women.

The attack had stark parallels with the fatal gang-rape in December of a 23-year-old student on a bus in New Delhi, which ignited nationwide protests over the country’s treatment of women and led to a toughening of the law against rape.

The family of the photographer in Mumbai released a statement at the weekend saying they were “optimistic” their daughter’s case would be fast-tracked and the “severest of punishments” would be imposed on those responsible.

They also pleaded with the media for privacy as they try to recover from this “nightmarish phase”.

The woman was earlier quoted by The Times of India as saying “rape is not the end of life” and that she wanted to return to work.

Since the attack, Mumbai police commissioner Satyapal Singh has sparked anger by suggesting that city residents need to choose between a “promiscuous culture” that allows public kissing, or a city made safe by “moral policing”.

“On the one hand you want to have a promiscuous culture and on the other hand you want a safe and secure environment for the people,” he said Tuesday.

Police in and around Mumbai have come under fire this year for targeting unmarried couples or single women out late instead of sex offenders.

Best-selling Indian novelist Chetan Bhagat was also slammed on social media sites Wednesday after tweeting that the country’s plunging currency had been “raped”.

“Chetan Bhagat, rape jokes are just not funny,” said an article on the news website Firstpost, adding that they are “tasteless and just plain crass”. – Rappler.com