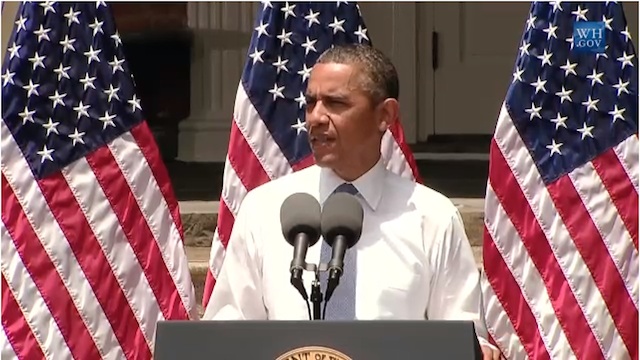 WASHINGTON, USA – US President Barack Obama told congressional leaders Tuesday, September 3, that Syrian President Bashar al-Assad must be held to account for using chemical weapons as he pressed for an endorsement of US military strikes.

Obama also said that he was confident he will win “prompt” Senate and House votes on authorizing military action which he wants next week, and pledged to upgrade US help to the Syrian opposition over time.

Obama warned the leadership of both parties in Congress and the bipartisan leadership of key security committees that Assad had violated a vital international norm by using chemical weapons.

“That poses a serious national security threat to the United States and to the region,” Obama said.

“And as a consequence, Assad and Syria needs to be held accountable.

Obama also emphasized that the operation he envisaged in Syria was “limited” and “proportional.”

“It does not involve boots on the ground. This is not Iraq and this is not Afghanistan.”

Asked whether he was confident that he would win votes likely next week in Congress, Obama replied at the White House meeting: “I am.”

Amid doubts over whether he can deliver on a huge gamble made on Saturday to call on Congress to support US military action that had seemed imminent, Obama said there was some “urgency” behind his request.

“We’re going to be asking for hearings and a prompt vote,” Obama told the leaders around a large table in the Cabinet Room of the White House.

“I’m very appreciative that everybody here has already begun to schedule hearings and intends to take a vote as soon as all of Congress comes back early next week,” Obama said.

Obama also added credence to signs that his administration may be preparing to increase support to the Syrian opposition following the chemical weapons attack that Washington blames on Assad’s forces on August 21.

Obama was also asked whether he would be prepared to negotiate the terms of a resolution authorizing military force that the White House sent to Congress on Saturday.

Some members of Congress want to narrow the authorization to ensure that the US involvement in Syria is not open ended and to codify Obama’s assurance that it will not result on US ground forces being used.

“So long as we are accomplishing what needs to be accomplished, which is to send a clear message to Assad, degrading his capabilities to use chemical weapons, not just now but also in the future … I’m confident that we’re going to be able to come up with something that hits that mark.” – Rappler.com