Sep 6, 2013 8:38 AM PHT
Agence France-Presse
Facebook Twitter Copy URL
Copied
The US sees no way to seek Security Council approval for action against the Assad regime due to Russia's blocking 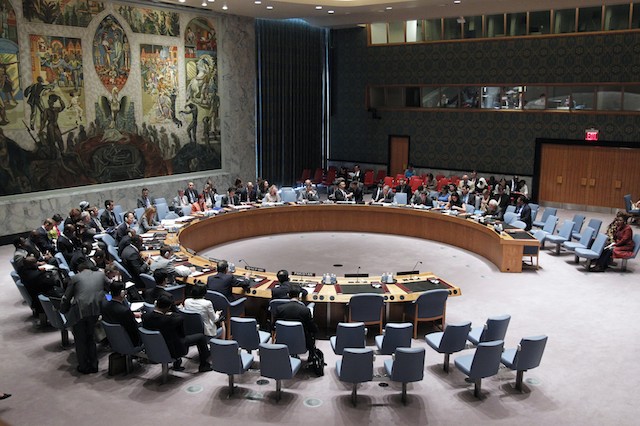 With the White House pushing Congress to approve military strikes on Syria, US ambassador to the United Nations Samantha Power said she could see no way to seek Security Council approval for action against President Bashar al-Assad because of Russia’s blocking.

Amid mounting tensions between Washington and Moscow, Power said Russia’s protection of Assad has put the whole Security Council system of handling international crises under strain.

“Even in the wake of the flagrant shattering of the international norm against chemical weapons use, Russia continues to hold the council hostage and shirk its international responsibilities,” Power told reporters as Russia hosted US President Barack Obama at the Group of 20 summit.

Power, who took over as US envoy to the United Nations one month ago, said the UN Security Council system, in which the five permanent members — Russia, the United States, China, France and Britain — can veto any resolution, had failed the Syrian people.

“Instead the system has protected the prerogatives of Russia — the patron of a regime that has brazenly staged the world’s largest chemical weapons attack in a quarter century,” Power said.

The envoy spoke after US officials briefed other UN members on evidence that Assad’s forces carried out an attack using banned poison sarin gas near Damascus on August 21.

She said the evidence “overwhelmingly” points to an attack by Assad forces.

The United States says more than 1,400 people died in the attack, which the Assad government, supported by Russia, has blamed on Syrian rebels.

Since an uprising against Assad erupted in March 2011, Russia and China have vetoed three western-proposed resolutions that would have aimed to increase pressure on Assad, without imposing sanctions.

The Russian president said this week he would be ready to consider Security Council action if he could be convinced that Assad forces staged the August 21 attack. Power said she did not believe Putin would budge however.

“We have seen nothing in President Putin’s comments that suggest that there is an available path forward at the Security Council,” the US envoy said.

The Obama administration is seeking approval from lawmakers for military strikes, which could be joined by France.

Power’s comments reinforced Obama’s stance that he was ready to order strikes without UN approval. And she stressed US exasperation at the repeated blocking of Security Council resolutions and statements.

The resolutions had been proposed hoping that “our common security and our common humanity might prevail,” she said.

“Unfortunately, for the past two and half years the system devised in 1945 precisely to deal with threats of this nature did not work as it was supposed to. It has not protected peace and security for the hundreds of Syrian children who were gassed to death on August 21. It is not protecting the stability of the region.”

She added: “To stand back would be to endanger not only international peace and security, not only US national security, but, we also believe, the very international system that we have been working these decades to build.”  – Rappler.com