Oct 11, 2013 9:47 PM PHT
Agence France-Presse
Facebook Twitter Copy URL
Copied
Spokesman Shahidullah Shahid told AFP the 16-year-old had done nothing to deserve the Nobel Peace Prize. "This award should be given to the real Muslims who are struggling for Islam. Malala is against Islam, she is secular." 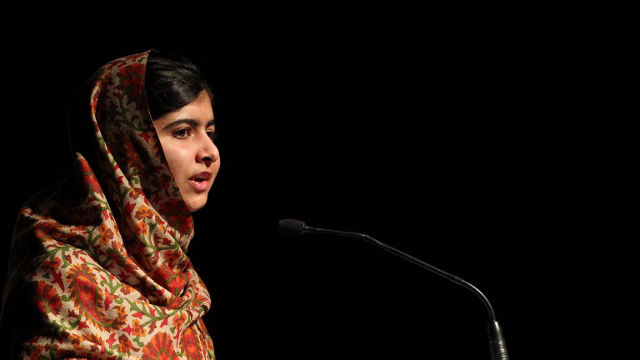 MIRANSHAH, Pakistan – The Pakistani Taliban said Friday they were “delighted” Malala Yousafzai, the teenage education activist they tried to kill, missed out on the Nobel Peace Prize.

The Tehreek-e-Taliban Pakistan (TTP) shot Malala in the head on her school bus on October 9 last year for speaking out against them.

After the shooting she was flown to Britain for specialist care and made a remarkable recovery, going on to become a global ambassador for children’s rights.

Spokesman Shahidullah Shahid told AFP the 16-year-old had done nothing to deserve the Nobel, which went to the Organisation for the Prohibition of Chemical Weapons (OPCW) for its work to rid the world of chemical arms.

“This award should be given to the real Muslims who are struggling for Islam. Malala is against Islam, she is secular.”

Feted by world leaders and celebrities for her courage, Malala has addressed the UN, this week published an autobiography, and would have been the youngest ever Nobel Peace Prize laureate if she had won.

Malala herself told Pakistani radio this week that she felt she had not yet done enough to earn the Nobel and spoke of her desire to do more practical work to promote education.

Malala first rose to prominence with a blog for the BBC Urdu service chronicling the difficulties of life under the rule of the Taliban, who controlled the Swat valley from 2007 until they were kicked out by the army in 2009.

Though the military operation ended the Taliban’s rule, pockets of militancy remain and it was in Swat’s main town Mingora that Malala was attacked.  – Rappler.com