Oct 12, 2013 1:47 AM PHT
Facebook Twitter Copy URL
Copied
The international community on Friday hailed the OPCW's Nobel Peace Prize win as much-deserved recognition for a group that has worked behind the scenes to rid the world of chemical weapons 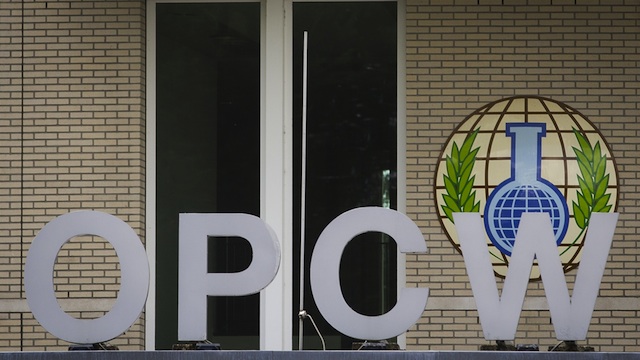 PARIS, France – The international community on Friday hailed the OPCW‘s Nobel Peace Prize win as much-deserved recognition for a group that has worked behind the scenes to rid the world of chemical weapons.

Previously little-known, the Hague-based Organization for the Prohibition of Chemical Weapons has emerged from the shadows in recent months as its inspectors were called in to verify Syria’s claims of destroying its chemical arsenal.

“Far from being a relic of the past, chemical weapons remain a clear and present danger,” Ban said.

“From the battlefields to the laboratories to the negotiating table, the United Nations is honoured to work hand-in-hand with the OPCW to eliminate the threat posed by chemical weapons for all people and for all time,” he said. (READ: UN leader says Nobel win proof of chemical arms threat)

US Secretary of State John Kerry said the prize recognised the “extraordinary steps” taken by OPCW workers in Syria.

“The Nobel Committee has rightly recognised their bravery and resolve to carry out this vital mission amid an ongoing war in Syria,” Kerry said in a statement.

The head of the UN weapons inspection team working with the OPCW in Syria said the prize would help boost the group’s efforts to enforce bans on chemical arms and dismantle existing stockpiles.

‘A powerful pat on the back’

“It’s really great,” Ake Sellstrom told Swedish public broadcaster SVT. “This is a powerful pat on the back that will strengthen the organization’s work in Syria.”

“I’m proud of him and the organization,” the wife of one of the group’s inspectors in Syria told AFP in The Hague, asking not to be named.

But underlining the risks the inspectors face, she added: “I guess it’s a time for celebration but he’s in Damascus so it’s not easy to celebrate.”

Congratulations for the OPCW poured in from European capitals, with European Commission chief Jose Manuel Barroso calling the award “a powerful recognition of the important role of the OPCW in curbing the use of chemical weapons.”

He promised the EU, which provides crucial funding to the OPCW, would continue to support the group as it “faces an unprecedented challenge in its current effort in Syria.”

EU President Herman Van Rompuy said the OPCW‘s work was “invaluable for all of us as our shared aim is a chemical weapons free world.”

“The work currently conducted by the OPCW in Syria is of paramount importance,” Van Rompuy said. “And with potentially even greater significance, this will hopefully set a new standard for the international community in responding to threats posed by weapons of mass destruction.”

In Paris, President Francois Hollande said the OPCW‘s win was a show of support for international efforts to destroy Syria’s chemical weapons arsenal.

“The Nobel prize is a vindication of all that France, and not just France, committed in the last few weeks to denouncing the use of chemical weapons and to eliminating them in the near future,” Hollande told journalists.

“This Nobel Peace Prize will give new momentum to global disarmament,” he said, promising that Berlin would also continue to support the group.

There were some notes of caution however, with rights group Amnesty International urging foreign powers to not focus exclusively on chemical weapons in Syria.

“The recent deal in Syria was of course a positive step to remove banned chemical weapons from the battlefield, but we can’t lose sight of the enormity of the human rights crisis in the country,” Amnesty International Secretary General Salil Shetty said in a statement.

Yemeni journalist and activist Tawakkol Karman, a 2011 Nobel Peace laureate, was among many who had been rooting for Pakistani teen and education icon Malala Yousafzai to take the prize.

But Karman congratulated the OPCW and said she expected Malala to some day win the award.

“I was hoping that Malala Yousafzai would win it. But I expect that she will win this important prize in the coming years,” Karman told AFP in Paris.

The Taliban, who tried to kill Malala for speaking out against them, said they however were “delighted” that she missed out on the prize. (READ: Pakistani Taliban ‘delighted’ Malala missed out on Nobel)

“This award should be given to the real Muslims who are struggling for Islam. Malala is against Islam, she is secular,” spokesman Shahidullah Shahid told AFP by telephone from an undisclosed location. – Rappler.com