Apr 21, 2012 8:53 AM PHT
Agence France-Presse
Facebook Twitter Copy URL
Copied
'There is no chance of any survivors...The plane is totally destroyed.' [UPDATED] HUSSAIN ABAD, Pakistan (AFP) – Pakistan has launched an investigation after a passenger jet crashed while attempting to land during a thunderstorm, with all 127 people on board believed dead.

The passenger airliner crashed near Islamabad on Friday, April 20.

The Bhoja Air flight from Karachi burst into flames after coming down in fields near a village on the outskirts of the Pakistani capital as it tried to land in rain and hail at the city’s international airport.

The airline said the Boeing 737 was carrying 121 passengers, including 11 children, as well as 6 crew.

“There is no chance of any survivors. It will be only a miracle. The plane is totally destroyed,” police official Fazle Akbar told AFP from the crash site.

So far 110 bodies have been recovered from the crash site, Brigadier Sarfraz Ali, who is heading the recovery efforts, told reporters.

“We cannot identify them because some of the bodies are not recognizable,” he said. 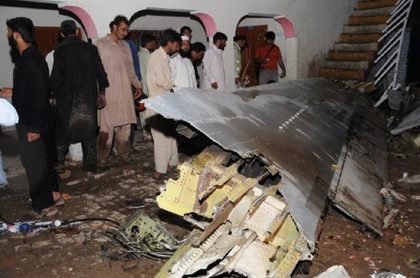 Debris from the crash was scattered over a 2-kilometer (mile-and-a-half) radius, he said. Lights had been brought to the site to allow work to continue through the night, he added.

Torn fragments of the fuselage, including a large section bearing the airline’s logo, littered the fields around the village of Hussain Abad, where the plane came down.

Rescue workers in orange jumpsuits and local residents used torches to search through the wreckage after nightfall, assisted by soldiers carrying assault rifles.

Part of the airline’s name could be read on a large section of ripped white fuselage from the passenger cabin.

The smell of burning filled the air at the scene and human limbs were scattered in a large area spattered with blood, witnesses said.

An AFP reporter saw an orange flight data recorder in a house where some of the wreckage fell.

“The weather was very bad, there was hail and thunderstorm. The pilot lost control and hit the ground. It tossed up due to the impact and exploded and came down in a fireball,” he said.

Saifur Rehman, an official from the police rescue team, said the plane burst into flames after impact.

“Fire erupted after the crash. The wreckage is on fire, the plane is completely destroyed,” Rehman told Geo television. An airport source said the plane had been due to land at Islamabad airport at 6:50 pm (1350 GMT) but lost contact with the control tower at 6:40 pm and crashed shortly afterwards.

Distraught relatives gathered at the airports in Islamabad and Karachi, searching for the names of loved ones on the passenger list for the ill-fated flight.

“Please don’t talk to me, I have just lost my loving father,” a teenage boy cried in Karachi.

A probe has been ordered into the crash, Defense Secretary Nargis Sethi said.

“We are working under the direct supervision of president and prime minister.”

Bhoja Air relaunched domestic operations with a fleet of five 737s in March, according to newspaper reports, when the airline was planning to start flights connecting Karachi, Sukkur, Multan, Lahore and Islamabad.

Bhoja had been grounded in 2000 by the Civil Aviation Authorities amid financial difficulties, the reports said.

The worst aviation tragedy on Pakistani soil came in July 2010 when an Airbus 321 passenger jet operated by the private airline Airblue crashed into hills overlooking Islamabad while coming in to land after a flight from Karachi.

All 152 people on board were killed in the accident, which occurred amid heavy rain and poor visibility.

The deadliest civilian plane crash involving a Pakistani jet came in 1992 when a PIA Airbus A300 crashed into a cloud-covered hillside on its approach to the Nepalese capital Kathmandu, killing 167 people. – Rappler.com