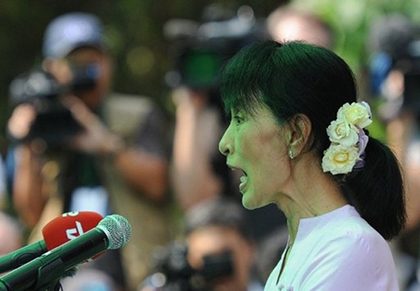 YANGON, Myanmar – Aung San Suu Kyi’s party confirmed Sunday, April 22, that it will postpone its parliamentary debut next week in the first sign of discord between Myanmar’s newly-elected opposition and reformist government.

The democracy icon and other members of her National League for Democracy (NLD) will not travel to the capital Naypyidaw to enter parliament on Monday, party spokesman Ohn Kyaing told AFP, following a dispute over the swearing-in oath.

“We are not boycotting, but we are just waiting for the right time to go,” said Suu Kyi, who won her first-ever seat in parliament in landmark April 1 by-elections, after a meeting on the issue in Yangon.

The NLD has baulked at the wording of the oath, which requires them to protect a constitution that was drawn up by the country’s former junta.

Authorities have rejected the party’s appeal to change the wording of the oath from “safeguard” to “respect” the constitution and a letter to the office of Myanmar’s reformist President Thein Sein on the issue was sent too late for the row to be resolved before the next session of parliament begins on Monday.

The NLD, which boycotted a controversial 2010 election, agreed to rejoin the political mainstream last year after authorities changed a similar phrase in party registration documents.

Suu Kyi has said one of her priorities as a politician is to push for an amendment of the 2008 constitution, under which one quarter of the seats in parliament are reserved for unelected military officials.

The spat casts a shadow over a rapid thawing in relations between long-isolated Myanmar and the international community since the Nobel Peace Prize winner and her party achieved a decisive win in the April 1 polls.

Suu Kyi, who was locked up for most of the last two decades, has shown increased confidence in the regime in recent weeks, calling for European Union sanctions to be suspended and planning her first international trip in 24 years. – Agence France-Presse