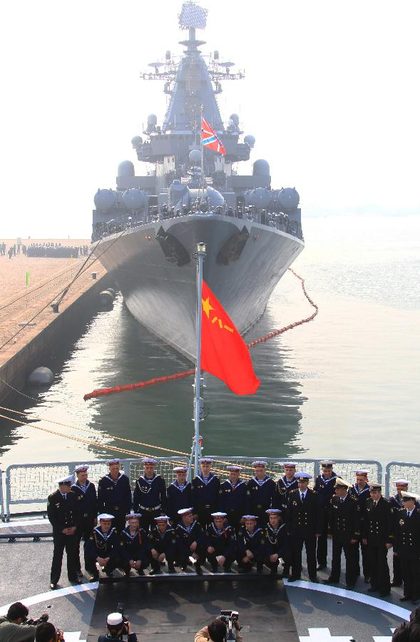 BEIJING, China (AFP) – China and Russia launched their first joint naval exercises Sunday, April 22, with war games in the Yellow Sea that come amid tensions between China and its Asian neighbors over territorial claims.

Although China has said the military exercises are designed to improve regional stability, they come at a time when Beijing is boosting military spending and more forcefully stating its case in territorial disputes.

China’s army newspaper warned Saturday, April 21, that other military exercises now taking place in Asia between the United States and the Philippines could lead to armed confrontation over the disputed South China Sea.

China and several of its neighbors have rival claims to uninhabited islands in the strategic maritime region, which is believed to be rich in oil and natural gas and straddles strategic shipping lanes vital to global trade.

Beijing and Tokyo also have a long-running dispute over another chain of islands in the East China Sea, called Diaoyu by China and Senkaku by Japan, which sit in rich fishing grounds that may also harbor energy resources.

China has 16 naval vessels and two submarines taking part in the exercises while Russia has four warships, according to state media.

They will focus on joint air defense, anti-submarine tactics and search and rescue, as well as simulated rescue of hijacked vessels and anti-terrorism drills.

“This joint military exercise is a long scheduled one between China and Russia in order to uphold regional peace and stability,” foreign ministry spokesman Liu Weimin told a regular news briefing on Thursday.

China and Russia have together participated in four military exercises since 2005, some involving other countries, state media has said.

China’s drills with Russia have taken place through a regional grouping, the Shanghai Cooperation Organization, which groups the two with central Asian countries in a forum originally established to counter NATO influence.

With military cooperation between the old Cold War allies on the rise, some analysts questioned the value of China holding exercises with Russia, given Moscow’s diminished role.

“Countries like Korea, Japan, Vietnam and India are already concerned about China’s role in the region,” he told AFP.

“From a Chinese perspective, I don’t see the value of this type of military exercise to building long-term strategic trust with its neighbors.”

Earlier this month, China and the Philippines dispatched vessels to enforce rival claims to a group of islands in the South China Sea.

The Philippines and the United States also started major war games as a timely boost to their military alliance, as part of Washington’s “pivot” towards Asia, which has provoked displeasure from China.

The People’s Liberation Army Daily, a newspaper known for its nationalistic editorial stance, on Saturday issued a warning to the United States over its participation.

“The mentality behind this sort of military exercise will lead to the road of military confrontation and armed force as a resolution,” the newspaper said.

Chinese experts see the exercises with Russia as giving its military chances to interact with a modern navy. Yin Zhuo, an expert who advises the Chinese navy, said the number of ships involved was unprecedented.

“Both sides will have deep exchanges in terms of tactics and technology,” Yin told state television.

Japan has so far not commented on the Sino-Russian drills.

But Japan’s defense ministry said in a recent report that China was becoming increasingly active in waters near Japanese territory while Russia was holding more frequent military exercises in its far east region. – Agence France-Presse