Apr 29, 2012 1:29 PM PHT
Agence France-Presse
Facebook Twitter Copy URL
Copied
A Thai web editor facing decades behind bars over remarks about the monarchy posted by other people on her website said she still hopes to be acquitted ahead of a closely-watched verdict this week 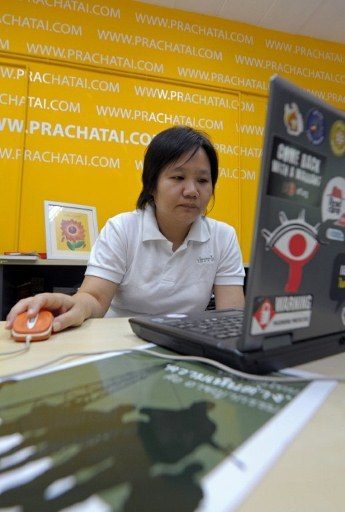 BANGKOK, Thailand – A Thai web editor facing decades behind bars over remarks about the monarchy posted by other people on her website said she still hopes to be acquitted ahead of a closely-watched verdict this week.

A Bangkok court is set to decide Monday, April 30, on charges against Chiranuch Premchaiporn that could carry a penalty of up to 20 years in prison, in a case that has shone a spotlight on Thailand’s strict lese majeste and computer laws.

Chiranuch, the editor of the popular Prachatai news website, denies allegations that she did not remove 10 online posts perceived as critical to the monarchy quickly enough in 2008.

“I don’t think I’m guilty; I think I did the right thing. Fighting this is the way to prove that I’m right,” she told AFP.

Chiranuch’s case has received widespread international attention, because of both the length of the potential sentence and the fact the accusations relate to other people’s comments that she says she removed as quickly as possible.

She has also made the unusual decision to deny the charges — many accused in Thai lese majeste trials opt to plead guilty in the hope of receiving a royal pardon.

“This is a quick solution for those who have that option but I don’t think that’s the right way to resolve the issue. That just means that it will remain an open wound in Thai history and the Thai justice system,” she said.

The royal family is a highly sensitive topic in politically turbulent Thailand. King Bhumibol Adulyadej, who is revered as a demi-god by many Thais, has been hospitalized since September 2009.

Observers say prosecutions under lese majeste legislation — which bans criticism of the king, queen, heir or regent — surged following a 2006 coup by royalist generals that left the kingdom deeply polarized.

The country saw huge street protests in Bangkok and a violent crackdown in 2010.

David Streckfuss, an independent academic and expert on lese majeste, said whatever the court decides, the Chiranuch case will have “important implications”.

An innocent verdict would herald a slight widening of public space on the Internet, he said, while a guilty judgment would see “an ugly backlash” against Thailand’s approach to freedom of expression.

“As the evidence is weak and the prosecutors have seemingly failed to show malicious intent, a guilty verdict would harm the already tarnished image of Thailand as a beacon of democracy in Southeast Asia,” he said.

Recent trials have sparked fierce debates on Thailand’s laws, including over a 61-year-old man who was jailed in November for 20 years for sending text messages deemed insulting to the monarchy.

A US citizen was handed two-and-a-half years in prison in December for allegedly defaming the king.

New York-based Human Rights Watch said Thailand’s new government, which is allied to ousted former premier Thaksin Shinawatra and was backed by his “Red Shirt” supporters in an election last year, had done little to improve freedom of expression.

Chiranuch, who has become a leading figure in the campaign for freedom of expression in Thailand, said she could not flee her homeland, despite the severity of the potential jail sentence.

“Sometimes I feel afraid. I’m not brave. The most important thing is not to let fear take over,” she said. – Agence France-Presse