Apr 30, 2012 5:21 PM PHT
Agence France-Presse
Facebook Twitter Copy URL
Copied
In a dramatic climbdown, the Nobel laureate told reporters at her National League for Democracy (NLD) party headquarters in Yangon that she would pledge to "safeguard" the army-created constitution 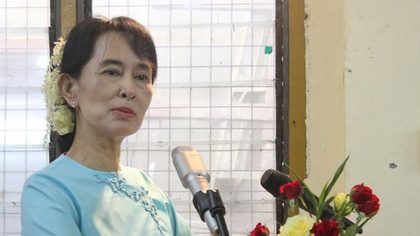 YANGON, Myanmar (AFP) – Myanmar opposition leader Aung San Suu Kyi on Monday said she will swear a controversial oath in parliament, ending a political impasse that saw her delay her debut in the legislature.

In a dramatic climbdown, the Nobel laureate told reporters at her National League for Democracy (NLD) party headquarters in Yangon that she would pledge to “safeguard” the army-created constitution.

“We have decided to comply at this juncture, because we do not want a political problem or tension,” she said, ending a dispute seen as the first sign of tension with the government since she won a parliamentary seat in historic April 1 by-elections.

“The reason we accept (the oath), firstly is the desire of the people. Our voters voted for us because they want to see us in parliament.”

The announcement comes a week after the veteran activist declined to attend the fledgling parliament.

Suu Kyi’s decision has meant she was not present in the legislature in the capital Naypyidaw to witness Monday’s landmark speech by visiting UN chief Ban Ki-moon — the first address by a foreign dignitary.

Members of the NLD — the main opposition force after securing 43 of the 44 seats it contested in the by-elections — are now set to attend the parliament on Wednesday, according to party sources, clarifying earlier statements that they would make the trip on Tuesday.

The NLD, which boycotted a controversial 2010 election, agreed to rejoin the political mainstream last year after authorities changed a phrase similar to the one that was under dispute in party registration laws.

Suu Kyi said her party had a “real desire to cooperate” to find a solution to the stalemate.

“We do not forget that the president complied with our wishes regarding the amendments of the election law and political party registration law,” she said.

The democracy icon has said one of her priorities as a politician is to push for an amendment of the 2008 constitution, under which one quarter of the seats in parliament are reserved for unelected military officials.

After spending much of the past two decades locked up, Suu Kyi was freed in 2010 and her election to parliament has been hailed by the international community as a step towards democracy in the long-isolated nation.

Myanmar has seen a rapid improvement in relations with the West under a new reformist regime which has implemented a slew of positive changes since coming to power last year, including freeing political prisoners.

Suu Kyi has shown increased confidence in the reformist government of President Thein Sein in recent weeks, calling for the suspension of EU sanctions and planning her first international trip in 24 years.

Last week, European Union nations put a halt to most sanctions against the impoverished nation for one year to reward a series of dramatic reforms since direct army rule ended last year.

She opened a new EU office in Yangon on Saturday that will mostly oversee the management of aid programs but also have a political role, in a first step towards establishing a full diplomatic mission. – Hla Hla Htay, Agence France-Presse