May 3, 2012 6:08 PM PHT
Agence France-Presse
Facebook Twitter Copy URL
Copied
The UN admitted a shaky three-week-old truce in Syria is not holding but said the number of observers would be doubled within days, as violence erupted near Damascus and the northern city of Aleppo 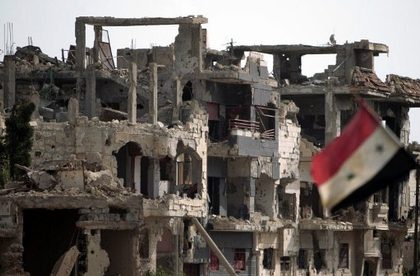 DAMASCUS, Syria (AFP) – The UN admitted a shaky three-week-old truce in Syria is not holding but said the number of observers would be doubled within days, as violence erupted Thursday, May 3, near Damascus and the northern city of Aleppo.

The latest unrest, in which at least four students were killed and dozens injured according to a monitoring group, followed a deadly day for the army Wednesday, May 2, when rebels killed 22 troops.

Despite the bloodshed, the head of a UN military observer mission said his team was having a positive effect, although the ceasefire was not holding.

Major General Robert Mood brushed off criticism that the UN Supervision Mission in Syria, or UNSMIS, had been too slow to get off the ground and said their numbers would double within days.

“This is not easy and we are seeing — by the action, by explosions, by firing — that the ceasefire is really a shaky one. It’s not holding,” the Norwegian general told Britain’s Sky News.

However, Syria’s main opposition coalition urged observers to visit detention centres, saying there had been an “escalation of arrests”.

“The Syrian National Council calls on the Security Council to pass a resolution demanding the Assad regime stop the escalation in arrests, murders and torture of detainees, and demand their release,” the group said.

It also called for the observers to count the number of detained and “carry out frequent and unannounced visits to the prisons” of those locked up in the almost 14-month uprising.

More than 100,000 people have been detained since the outbreak of the revolt against President Bashar al-Assad’s regime, according to the Syrian Observatory for Human Rights, which puts the number still behind bars at more than 25,000.

The United Nations has accused both the regime and its opponents of violating the ceasefire that is part of a peace plan brokered by UN-Arab League envoy Kofi Annan.

The plan calls for a halt to fighting, the withdrawal of heavy weapons from urban areas, a daily humanitarian ceasefire, media access, an inclusive political process, and the right to demonstrate as well as the release of detainees.

More than 9,000 people have been killed in Syria since the anti-regime uprising broke out in March 2011, according to UN estimates while the Observatory puts the figure at more than 11,100.

The Britain-based monitoring group said security forces early Thursday launched raids in the town of Douma and farmlands outside Harasta, both in Damascus province.

It also reported four students killed and dozens injured during the night when troops stormed a university campus in Aleppo.

The Observatory added that three of the wounded students were in critical condition and some 200 detained in the raid just after midnight.

Activists said the assault was in response to daily anti-regime demonstrations at the university.

On Wednesday, 15 troops, including two colonels, were killed in a dawn ambush in Aleppo province, according to the Observatory.

Two rebels also died in the attack near Al-Rai village, after Assad’s forces had “scaled up military operations” there in the days since the truce took effect on April 12, said the group.

Clashes on Wednesday near Damascus killed seven soldiers and a rebel fighter, while the army shelled and torched activists’ homes in eastern Deir Ezzor province, the watchdog said.

At least four civilians were also killed by army gunfire.

Human Rights Watch accused the regime of committing atrocities in the eastern province of Idlib shortly before the truce took effect.

“Syrian tanks and helicopters attacked one town in Idlib after another,” Anna Neistat, associate director for programs and emergencies at HRW, said in a statement.

A top US Treasury Department anti-terror official, Daniel Glaser, is meanwhile embarking on a tour of Saudi Arabia, Kuwait, Qatar, Israel and the United Arab Emirates to discuss sanctions against Syria as well as Iran.

Glaser will “highlight the need for governments and financial sectors to remain vigilant against attempts by the Syrian and Iranian regimes to evade multilateral sanctions,” the Treasury Department said. – Agence France-Presse