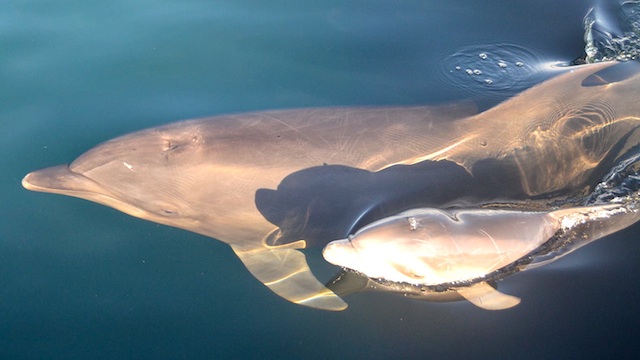 WASHINGTON, D.C. – Bottlenose dolphins with missing teeth, lung disease, and abnormal hormone levels were found swimming in the Gulf of Mexico a year after the BP oil spill, US researchers say.

Pneumonia, liver disease and a pregnant female carrying a dead fetus were also reported in the first major study of dolphin health after the 2010 Deepwater Horizon oil rig explosion that spilled 4.9 million barrels of oil into the Gulf of Mexico.

Half of the 32 dolphins studied off the coast of Louisiana in August 2011 – a year and 4 months after the worst oil spill in US history began – were judged to be seriously ill or in danger of dying.

The wild dolphins were captured in the central Louisiana waters and held briefly for health checks before being released.

“There is disease in any wild population. We just haven’t seen animals that were in such bad shape as what we saw in Barataria Bay,” she said.

Their health was compared to 27 bottlenose dolphins in Sarasota Bay, Florida, an area also in the Gulf that was unaffected by the oil spill.

The Barataria Bay dolphins had significantly lower levels of adrenal hormones, which are critical to an animal’s stress response.

Moderate to severe lung disease was 5 times more common in the Louisiana dolphins than in their Floridian counterparts.

Three of the Barataria Bay dolphins had also lost nearly all their teeth, and 3 others had just half of their normal number of teeth left. Dolphins typically have between 78 and 106 teeth.

“There were several dolphins that were in such bad shape that the veterinarians that examined them did not expect them to live very long,” said Schwacke, an expert on dolphins in the southern United States.

BP says oild not the cause

Oil giant BP said the report, which appeared in December 2013 in the journal Environmental Science and Technology, was “inconclusive as to any causation associated with the spill.”

Asked for comment, BP spokesman Jason Ryan directed Agence France-Presse to a company statement that read in part: “Symptoms observed in the study have been seen in other dolphin mortality events that have been related to contaminants and conditions found in the northern Gulf, such as polychlorinated biphenyls (PCBs), DDT and pesticides.”

BP also called on NOAA to release all of its data on the unusual deaths of more than 1,000 dolphins off the Gulf Coast, dating back to February 2010, 3 months before the spill.

NOAA researchers admitted that their study cannot prove that the dolphin’s health problems were caused by the BP oil spill because there were no studies of dolphin health in that area prior to the spill.

However when comparing blubber, the Louisiana dolphins have lower levels of pesticides and flame retardant chemicals than the Florida group, suggesting that agricultural runoff and common pollution were not the cause of their diseases.

“We feel like it is highly unlikely that the toxic effects that we observed in Barataria Bay dolphins were associated with exposure to other environmental contaminants,” said Schwacke.

“What we are seeing is consistent with oil exposure,” she said.

NOAA said it is still trying to determine why 1,082 dolphins have been stranded in the northern Gulf of Mexico since February 2010.

An unusually high number of dolphins and whales started washing up on shore prior to the April 20 Deepwater Horizon rig explosion that sparked the underwater spill.

Those included 86 baby dolphins that washed ashore dead from Louisiana to western Florida between January and April 2011.

NOAA scientist Teri Rowles said that neither the measles-like morbillivirus – blamed for killing bottlenose dolphins along the US East Coast – nor the bacterial infection brucellosis appear to be the cause of the Gulf of Mexico deaths.

“At this time we don’t have a factor that we can pinpoint as a causative agent and we certainly at this point cannot rule out the role of the BP oil spill in the mortality event,” said Rowles.

Craig Harms, a veterinarian that helped check the dolphin’s health, told Agence France-Presse that their symptoms mirrored those seen in lab animals exposed to oil.

“Crude oil exposure is the most reasonable explanation for adrenal insufficiency and lung disease in the Barataria Bay dolphins,” said Harms, an associate professor at the North Carolina State University College of Veterinary Medicine. – Rappler.com