Feb 6, 2014 9:54 AM PHT
Facebook Twitter Copy URL
Copied
Diplomats have urged the Shiite-led government to reach out to the Sunni Arab minority to undercut support for militancy, but Prime Minister Nuri al-Maliki has taken a hard stance 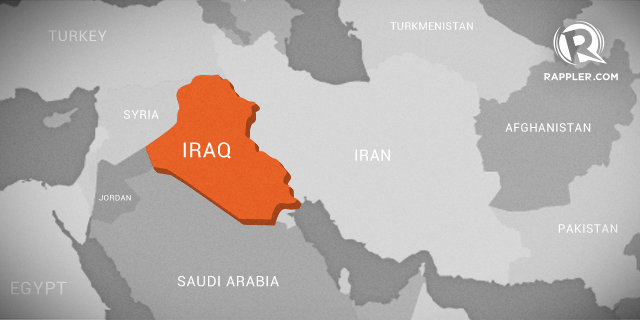 BAGHDAD, Iraq – Bombings in Baghdad, including three near the heavily fortified Green Zone and the foreign ministry, killed 33 people Wednesday, February 5, prompting US lawmakers to criticize the slow pace of reconciliation efforts.

The attacks, which also wounded dozens, came as security forces battled militants in the western province of Anbar, including the Islamic State of Iraq and the Levant (ISIL), a powerful jihadist group that has exploited the chaos in neighboring Syria.

With violence at its highest level since 2008, diplomats have urged the Shiite-led government to reach out to the Sunni Arab minority to undercut support for militancy, but Prime Minister Nuri al-Maliki has taken a hard line with a general election due in April.

US House Foreign Affairs Committee chairman Ed Royce said Maliki’s failure to do more to address Sunni grievances had allowed ISIL to exploit the minority community’s “alienation” to sharply step up its attacks.

Wednesday’s deadliest bombings, which included at least one suicide attack, struck during morning rush hour. They ripped through confessionally mixed areas of the capital bordering the Green Zone, home to parliament, the prime minister’s residence and the US and British embassies.

They killed 25 people and wounded 35, security officials and a medical source said.

One attack was just opposite the foreign ministry, which has been hit by explosions in the past, notably in August 2009, when a massive truck bomb devastated the building, and again ahead of an Arab summit in Baghdad in 2012.

A suicide bomber also hit a restaurant, and a vehicle rigged with explosives was detonated in a market for car spare parts, both close to the Green Zone.

Blood and pieces of flesh littered the scene at the restaurant, and soldiers said one of their comrades had wrapped his arms around the bomber in a bid to save others.

Later, three car bombs in southeast Baghdad killed eight people and wounded 32, while a rocket attack on Haifa Street in the centre of the capital wounded five.

The day’s toll could have been higher, but security forces found a roadside bomb near the oil ministry in central Baghdad and carried out a controlled explosion.

More than 1,000 people were killed last month, according to government figures, as security forces have struggled to curb bombings and battle militants in Anbar.

No group immediately claimed responsibility for the latest attacks, but Sunni militant groups, including ISIL, have claimed coordinated bombing campaigns in Baghdad in the past.

“As head of state, while he may not be up to it, Maliki must take steps to lead Iraq to a post-sectarian era,” Royce said.

“Al-Qaeda has become very skilled at exploiting this sectarian rift, and Maliki’s power grab has given them much ammunition.”

US Deputy Assistant Secretary of State for Iraq and Iran Brett McGurk insisted Maliki had made changes since he visited Washington in November and “got a very direct message” from President Barack Obama on “enlisting the Sunnis into the fight.”

ISIL has also been fighting security forces in Anbar, a mostly Sunni desert region bordering Syria where militants have held parts of Ramadi and all of Fallujah for weeks.

In Fallujah, however, security forces have largely stayed out of the city for fear that major incursions could spark high civilian casualties and heavy damage to property.

The city was a bastion of the Sunni insurgency following the 2003 US-led invasion, and American troops there fought some of the costliest battles since the Vietnam War.

Ahmed Abu Risha, a prominent tribal leader in the Sunni Awakening movement, which allied with US troops against Al-Qaeda and now supports the government, said an attack on the city was imminent and urged anti-government fighters to lay down their arms.

The stand-off in Anbar has prompted more than 140,000 people to flee their homes, the UN refugee agency said, describing it as the worst displacement in Iraq since the peak of the sectarian fighting. – Rappler.com