May 10, 2012 8:45 AM PHT
Agence France-Presse
Facebook Twitter Copy URL
Copied
The Russian Sukhoi Superjet with about 50 people on board vanished from radar screens south of the Indonesian capital Jakarta 50 minutes into what was meant to be a brief demonstration flight 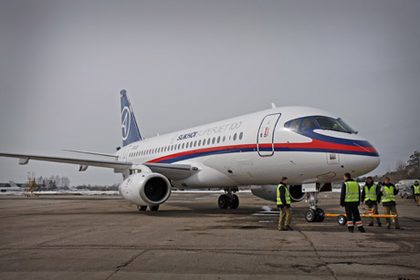 CIDAHU, Indonesia (AFP) – Indonesian rescuers Thursday, May 10, intensified a search for a missing Russian Sukhoi Superjet with about 50 people on board that disappeared in mountainous terrain during a demonstration flight.

The plane vanished from radar screens south of the capital Jakarta 50 minutes into what was meant to be a brief flight on Wednesday, May 9, and initial efforts to locate the jet proved fruitless.

Shortly after dawn on Thursday a team of 40 rescuers headed towards Salak mountain, where the Superjet 100 went missing, an AFP reporter said, with helicopters also due to join in the search.

“So far we still have not found the plane. I cannot confirm but there is a possibility that it could have crashed,” said Ketut Parwa, the capital’s search and rescue agency chief, who is coordinating operations.

“If it had made an emergency landing we should have received some news via the radio or phone calls by passengers by now,” he told AFP.

Juanda, a 41-year old villager who goes by one name, said he was feeding his chickens when he heard a roar overhead.

“I looked up and saw a huge white plane moving unsteadily just slightly below the mountain summit. It was still way above the trees but veering left and right, and then it disappeared,” he told AFP by telephone from Tenjolaya district near Salak mountain.

“I heard a sound like firecrackers, but I couldn’t see it anymore,” he said.

Two helicopters searching for the plane Wednesday evening were forced to turn back due to strong winds and bad weather, and Parwa said choppers would be sent out again after sunrise.

By midnight Wednesday, hundreds of rescuers had set up three posts around the mountain as they prepared for search and rescue operations.

“We fear it might have crashed in a jungly area 2,000 meters (6,500 feet) above sea level near Kawah Ratu,” a crater on the slopes of Salak, Parwa added.

There were scenes of grief at the airport in Jakarta late Wednesday, with relatives of passengers sitting on luggage carousels weeping uncontrollably, waiting for information.

Reports of the number on board varied, with local rescue officials saying the plane was carrying 46 people and Trimarga Rekatama, the company responsible for inviting the passengers, saying 50 were on board.

Herry Bakti, head of the aviation division of Indonesia’s transport ministry, said the Superjet was on the second of two demonstration flights, and those on board were invited guests.

A list of 36 passenger names showed most were Indonesian airline and aviation officials, plus five journalists and a representative of French aircraft engine maker SNECMA.

The French embassy in Jakarta confirmed there was one French national aboard.

Russia’s RIA Novosti news agency reported 36 non-Russians on board and eight Russians, four of them crew and the others Sukhoi company representatives. It named the captain as Alexander Yablontsev, 57, a veteran pilot.

The Superjet made its first commercial flight last year and if a major accident is confirmed it would be the first disaster to involve the aircraft.

The Superjet 100 is a new passenger aircraft built by legendary Russian planemaker Sukhoi in an attempt to lift the country’s civil aviation industry from a post-Soviet crisis.

The Superjet, crucial to Russia’s hopes of becoming a major player in the modern aviation market, is a joint venture between Sukhoi and Italy’s Alenia Aeronautica.

It is being flown by two airlines, Russia’s Aeroflot and Armenia’s Armavia, but orders have been confirmed with more, including Indonesia’s Kartika Airlines and Sky Aviation, state-run news agency Antara reported.

The demonstration flight in Indonesia was part of an Asian roadshow to promote the aircraft. – Arlina Arshad, Agence France-Presse