The Indonesian Sangirs in Mindanao 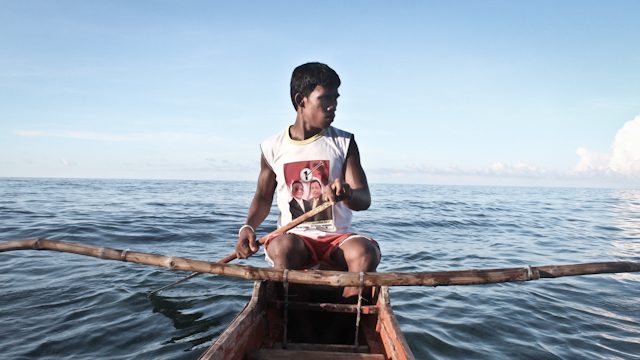 SARANGANI, Davao Occidental – “When the waters are calm, we can reach Indonesia in 3 hours or so,” says Alfrede Lahabir, who points his lips toward the window of his nipa hut, from where the Celebes sea can be seen.

“We go to Indonesia at least once a month,” he says, taking a puff of his cigarette clove. “We buy soap and cigarettes from Matutuang and Bitung and sell it [them] here. In return, we sell kitchenware from the Philippines when we reach those islands. “

Lahabir speaks in a mixture of Manado Malay and Cebuano. He is referring to Matutuang, a part of the Sangihe group of islands, and the city of Bitung, both in Indonesia, about 3 to 6 hours away from where he lives in Pakiluaso, a small coastline village of around 30 families in Mindanao.

Easily mistaken for another Filipino, Lahabir, 31, belongs to the tribe of Indonesian Sangir. His parents once braved the waters from Indonesia’s Sangihe Islands to reach and settle in Balut Island, one of the two islands that form the municipality of Sarangani in Davao Occidental.

Lahabir was born in Sarangani, a province south of mainland Mindanao. Now, he is one of the estimated 6,000 people of Indonesian descent living in the southern coast of Mindanao, according to the Pasali Philippines Foundation, a group the United Nations High Commissioner on Refugees (UNHCR) has tasked to track down the Indonesians in the Philippines.

As he lives outside the borders of his own country, Lahabir has been excluded from the privileges usually enjoyed by Indonesian citizens. Although he is born and raised in the Philippines, Lahabir still looks up to Indonesia as the country where he belongs. Yet, having lived here for so long, he has become estranged from his culture, which he can only access through VCDs and other items brought in from Indonesia.

The exact population of the Sangirs in the Philippines is yet unknown. Both the UNHCR study and an existing government census have tracked down the number of Indonesians in the country, which included not only the Sangirs but also Indonesian expatriates who have relocated at Balut Island for work and study.

Every year each Sangir family member has to pay the Philippine government P150 to obtain the Alien Certificate of Registration (ACR) that grants them the privilege to stay.

The fee is relatively small, but not the traveling costs involved: The boat ride from the center of Pakeluasu to Mabias on Balut Island costs P500, and the ride from Mabias to General Santos costs P350 for each person. A prohibitive sum for a whole family.

Lahabir but does not mind.

“We just have to comply with the rules. Because, after all, we are aliens in this land,” he says.

Plans for the future Now married to a Filipino and a father of 2, Lahabir lives on fishing. His wife has opted for Filipino citizenship for his children, making Lahabir the only Indonesian in the household.

The couple’s plans for the future is simple: that the children finish college. They still do not know how to go about it. “We do not dream of getting rich,” says Lahabir. “We just want to have enough to make ends meet.”

Indonesian communities here have their own community liaison officers, called “penghubung.” A liaison, such as Nuryati Rabika Elarde, 43, is appointed by the Indonesian Consulate to coordinate with the community and their consular office.

“Many cannot renew their ACRs because of poverty,” says Elarde, a resident of Sarangani Island.

Elarde volunteers to teach the Indonesian Sangir children once a week, but as soon as the children return to their own language, they forget about Indonesian for the rest of the week. On Balut Island, the Sangirs speak Sangir first, and Cebuano second. Most of them could hardly speak Indonesian.

Alfreddie Lahabir’s son, 9, says he’d rather be a Filipino than an Indonesian. He speaks fluent Filipino, and is very good at it, and tells me he does not know how to speak Sangir.

Later, I hear him speaking Sangir among his friends.

But every Saturday, Alfreddie goes to the daycare learning centers in Pakeluasu, where Nerlyn Sasamu Dagcutan, 37, serves as the “guardian,” an Indonesian term for a tutor, tasked to train the children speak Bahasa Indonesia, Indonesia’s national language.

On weekends, the 20-square-meter concrete school owned by the Philippine government turns into a classroom where Sangir children learn about the Indonesian culture and language.

Learning materials are sorely lacking. “We do not have visual aids nor language books so the students can learn faster. I keep on repeating the lesson all over again the following week because they keep on forgetting it,” laments Dagcutan. And not all children have notebooks with them.

Here, the kids learn to sing songs of patriotism like “Dari Sabang sampai Merauke (From Sabang to Merauke),” despite never understanding on the song’s meaning. For Dagcutan, what’s important is that the children learn about Indonesia, their “tanah air (homeland).”

“At least, in my own way, I have taught them something about our country,” she says. – Rappler.com