Mar 29, 2014 8:17 AM PHT
Agence France-Presse
Facebook Twitter Copy URL
Copied
The casualties include an Egyptian woman journalist who worked for privately owned Al-Dustour newspaper. She was shot in the head while covering clashes 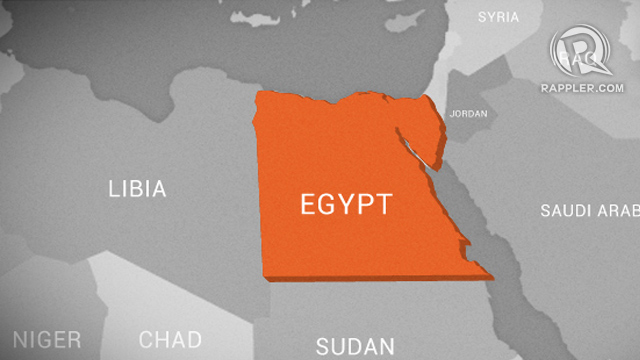 The violence erupted in a deeply polarized Egypt as supporters of deposed president Mohamed Morsi took to the streets of Cairo, Alexandria and other cities to vent their anger at Sisi who overthrew the Islamist leader nine months ago.

Mayada Ashraf, who worked for privately owned Al-Dustour newspaper and freelanced for news website Masr Alarabia, was shot in the head while covering clashes in the northern neighborhood of Ein Shams, a security official told Agence France-Presse (AFP).

4 more people were killed in the same violence and 11 others wounded by birdshot and live ammunition, the interior ministry said.

It said 79 Morsi supporters were arrested nationwide in possession of Molotov cocktails and fireworks.

In her last report published on Al-Dustour website, Ashraf said the clashes were pitting Morsi supporters against civilian opponents, adding the two sides traded fire with live ammunition and birdshot.

It was unclear when her report was filed during the clashes, in which police later intervened.

A colleague from Masr Alarabia who was with her told AFP they split up as police clashed with protesters, and they went in different directions.

“I later called her telephone to check up on her but a protester answered, and said she had died with a bullet to the head,” Mohamed Rabie said.

Rabie said the protesters carried her corpse to a nearby mosque, where he found it.

The interior ministry blamed the killings on Morsi supporters, saying armed protesters opened fire at random. One victim, another woman, was stabbed to death, the ministry spokesman said.

But protester Galal Ali told AFP that it was police who fired at the crowd as demonstrators were about to disperse.

19 people were wounded nationwide, 4 in the northern province of Damietta and 15 in Cairo, health ministry official Khaled al-Khatib told AFP.

Violence rocked other parts of Cairo.

Sisi, who was also defense minister and deputy prime minister, announced his resignation on Wednesday, March 26, to enable him to stand in the election. (READ: Egypt’s Sisi announces run for presidency)

On Friday, dozens of his supporters also demonstrated to celebrate his candidacy, carrying Egyptian flags and his portraits in the Mediterranean city of Alexandria and Cairo’s iconic Tahrir Square, symbol of the 2011 uprising that toppled veteran president Hosni Mubarak.

His candidacy is likely to further inflame Islamist protesters and worry secular activists who fear a return to rule by the military and the strong-arm tactics of the Mubarak era.

Sisi faces no serious competition in his bid for the presidency and is widely seen as the only leader able to restore order after more than three years of turmoil.

The electoral committee said it will hold a news conference on Sunday, March 30, to announce the timetable of the presidential election, MENA reported. (READ: Egypt government resigns: cabinet statement)

The poll is scheduled to take place before June.

Morsi’s Muslim Brotherhood has rejected Sisi’s candidacy outright and a coalition of his supporters had called Friday’s protests.

“What we said nine months ago was confirmed and the mask fell off from the face of the coup leader… with the announcement of his candidacy to ‘the bloody presidency’,” it said in a statement Thursday, March 27.

Sisi “broke the oath he made before the elected president Mohamed Morsi by toppling him and made the Egyptian army enter the political arena with him,” the coalition added.

Sisi is believed to be the real power behind interim president Adly Mansour, under whose watch police have killed hundreds of Islamist protesters and detained about 15,000 suspects since Morsi’s ouster. (READ:

The crackdown has stirred international concern and outrage after 529 Morsi supporters were sentenced to death this week over deadly riots. – Rappler.com