Mar 29, 2014 10:49 AM PHT
Agence France-Presse
Facebook Twitter Copy URL
Copied
'It's that after a decade of war, the United States has limits' 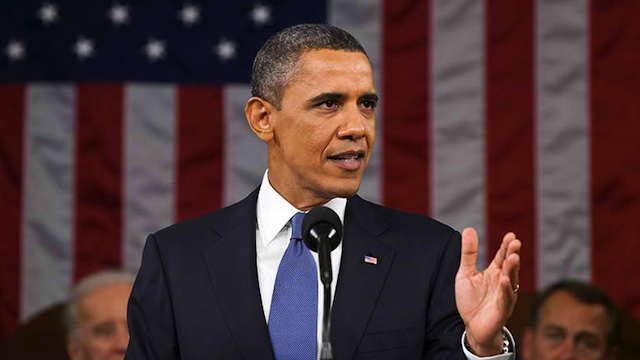 WASHINGTON DC, USA – President Barack Obama on Friday, March 28, defended his administration’s decision not to use military force in Syria, saying that the United States has its limits.

The US leader’s comments came in an interview taped ahead of his visit to Saudi Arabia, which was angered by his 11th-hour decision last year to pull back from strikes against the Syrian regime over its use of chemical weapons in the country’s civil war.

“It is, I think, a false notion that somehow we were in a position to, through a few selective strikes, prevent the kind of hardship we’ve seen in Syria,” Obama told broadcaster CBS in Rome.

“It’s not that it’s not worth it,” he added. “It’s that after a decade of war, the United States has limits.” (READ: Obama says US can’t turn ‘blind eye’ to Syria)

Obama went on to suggest that the US military would not have been able to have much impact without committing itself long-term.

“Our troops who have been on these rotations and their families and the costs, and the capacity to actually shape in a sustained way an outcome that was viable without us having a further commitment of perhaps another decade, those are things that the United States would have a hard time executing,” he said.

“And it’s not clear whether the outcome, in fact, would have turned out significantly better.”

Now in its fourth year, the bloody civil war has claimed more than 140,000 lives and displaced many others, causing a refugee crisis in the region. (READ: Syria rebels on northern offensive after losses)

“To look at a country like Syria and see how it’s been torn apart, to see the humanitarian crisis that’s taking place, surely, that is not consistent with any reasonable interpretation of what Islam is all about, to see children starving or murdered, to see families having to abandon their homes,” Obama said.

Saudi Arabia is a major backer of the Syrian rebellion, and has been pushing for a stronger international stance against President Bashar al-Assad.

Obama told King Abdullah that “he believes that our strategic interests remain very much aligned” with those of the kingdom, a senior US administration official told reporters. – Rappler.com