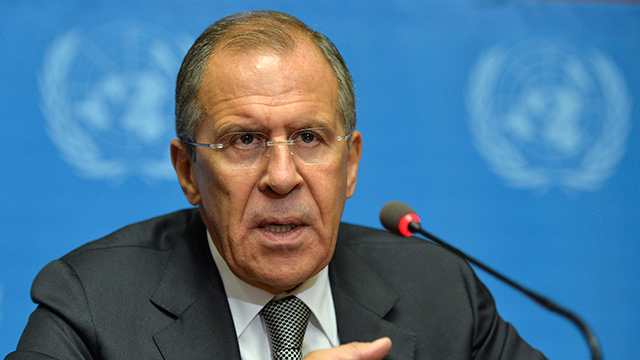 MOSCOW, Russia (UPDATED) – Russia on Saturday, March 29, pledged it would not invade mainland Ukraine following its seizure of Crimea, favoring a federal solution for the ex-Soviet state as diplomacy with the West gathered momentum.

Tensions have run high since Moscow’s lightning takeover of Crimea from Ukraine, with the United States accusing Russia of massing tens of thousands of troops on Ukraine’s eastern border.

But telephone talks between Putin and US counterpart Barack Obama late on Friday and the possibility of a new meeting between the top Russian and American diplomats were the latest signs of progress in the search for a mutual solution in what remains the worst East-West crisis since the Cold War.

Foreign Minister Sergei Lavrov suggested Moscow’s main demands in the talks were that Ukraine should be made into a federation, commit to not joining NATO and restore order to cities after almost half a year of street protests.

Putin also told Obama that the problems surrounding the breakaway Moldovan region of Transdniestr – a Russian-speaking region seen by some as the Kremlin’s next target – should be solved not by force but by talks in the “5+2” format of Moldova, Transdniestr, the OSCE, Russia and Ukraine, with the EU and US as observers.

Ukraine is now at a crossroads after the fall of pro-Kremlin president Viktor Yanukovych in February and the clock ticks down to May 25 presidential elections which are expected to cement Kiev’s pro-West course.

With boxing champion turned politician Vitali Klitschko bowing out of the race, the overwhelming favorite to win the polls is pro-European confectionary tycoon Petro Poroshenko, although feisty former premier Yulia Tymoshenko is expected to mount an all-out campaign since declaring her candidacy this week.

‘No intention’ to invade

Lavrov said Moscow has no intention of ordering its armed forces to cross over the Ukrainian border and acknowledged the divisions between Moscow and the West on the crisis are narrowing.

“We have absolutely no intention and no interests in crossing the Ukrainian border,” he told Russian state television.

“We (Russia and the West) are getting closer in our positions,” he added, saying recent contacts had shown the outlines of a “possible joint initiative which could be presented to our Ukrainian colleagues,” he added.

Lavrov made clear Russia’s priorities for Ukraine were a federalisation which would allow the interests of everyone in Ukraine — including Russian speakers in the east and south — to be fully represented.

He said Ukraine should also commit to being non-aligned — with Ukrainian NATO membership clearly a red line for Moscow.

“There should be no ambiguity here. There is too much ‘not for the time being’ and ‘we don’t intend’ (to join NATO). Intentions change, but facts on the ground remain,” he said.

He said that the West was now “listening” to Russia’s idea of a federalised Ukraine and a federation (for Ukraine) “is far from being a forbidden word in our talks,” Lavrov said.

The United States and European Union clearly want Russia to de-escalate tensions by removing the troops said to be surrounding Ukraine’s eastern borders.

The Ukrainian government this week estimated there were now 100,000 Russian soldiers positioned around Ukraine — a figure neither confirmed nor denied by Moscow.

Putin and Obama had earlier discussed ways to solve the crisis in Ukraine, both the White House and the Kremlin said in separate statements, although neither side gave precise details on the nature of the plan on the table.

However, in a sign both sides feel there is something to discuss, US Secretary of State John Kerry made a last-minute change of plans on Saturday to fly to Paris from Riyadh with the aim of setting up talks with Lavrov.

The Russian foreign ministry said both men spoke by phone on Saturday, adding only that they discussed a “timetable for future contacts.”

A foreign ministry source told the ITAR-TASS news agency that the two men would meet “soon” and were in the process of finalising a time and place.

Russia is also feeling economic pressure, with the United States and European Union having already hit Moscow with sanctions against senior officials and markets worried about measures that could hurt the wider economy.

The race to take on the permanent role of Ukraine president became clearer as Klitschko announced he would not stand in the polls, leaving Poroshenko as the clear favourite in what could still be a tight race.

“We have to nominate a single candidate representing the democratic forces,” Klitschko told a congress of his UDAR (Punch) party.

“This has to be a candidate who enjoys the strongest public support. Today, this candidate in my opinion is Petro Poroshenko.”

This could give a clear run to confectionary tycoon Poroshenko – the only prominent Ukrainian businessman to back the protests against Yanukovych – who has already declared he is standing.

Tymoshenko, who was jailed under Yanukovych, has a lot of ground to make up to catch Poroshenko who leads in opinion polls but analysts see her as a wily campaigner who can make up ground. – Rappler.com