Tatar minority to vote for autonomy in Crimea

Mar 29, 2014 7:04 PM PHT
Agence France-Presse
Facebook Twitter Copy URL
Copied
Crimea's Tatars will vote on whether to push for self-rule in their homeland 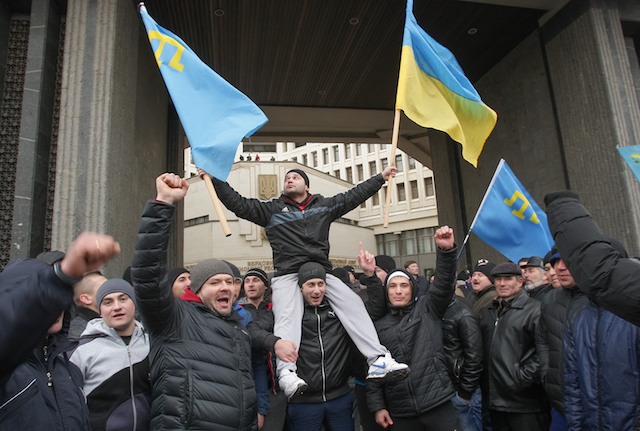 BAKHCHYSARAY, Crimea – Crimea’s Tatars will on Saturday, March 29, hold a vote on whether to push for self-rule in their historic homeland following its annexation by Russia.

Ethnic Tatars from all over Crimea convened in the town of Bakhchisaray for an emergency Qurultai, or congress, to decide on the fate of the Muslim community of about 300,000 people on the Black Sea peninsula.

“There comes a moment in the life of every people when a choice must be made that will determine its future,” said Tatar leader Refat Chubarov.

He urged the audience packed into a community centre to vote for a draft resolution calling for the “launch of political and legal procedures (for the) national and territorial autonomy of the Crimean Tatar people on their historical territory, Crimea.”

The document notes the Crimean Tatars’ concern over the recent upheaval on the peninsula, which saw pro-Russian militia and Russian troops oust Ukrainian soldiers after a Moscow-backed referendum saw the peninsula split from Ukraine.

Among more than 200 people attending the congress where Russian officials and religious leaders, including the Grand Mufti Ravil Gainutdin, also an ethnic Tatar.

“This land is the Crimea, the motherland of the Crimean Tatars,” Gainutdin said to huge applause from the audience.

“I pray to Allah that you make the decisions that will be helpful to the Crimean Tatar people,” Gainutdin said, adding that in Russia several regions were multi-ethnic and “know how to build peace in our common home to have a good life.”

The Crimean Tatars, which make up about 12 percent of Crimea’s population, strongly opposed and largely boycotted the hastily-organized March 16 referendum.

However he said that if Russians in Crimea were given the chance to determine their future, all those involved “have to proceed from the premise that the Crimean Tatars also have this right.”

The Tatars are wary of Moscow rule because Soviet leader Joseph Stalin ordered them to be deported en masse from their homeland to Central Asia at the end of World War II, with half reportedly dying en route. They were not allowed to return to Crimea until the late 1980s. – Rappler.com