Mar 30, 2014 12:40 PM PHT
Facebook Twitter Copy URL
Copied
Polls opened in Thailand Sunday to elect the upper house of parliament in a vote that could hold the key to the fate of the prime minister 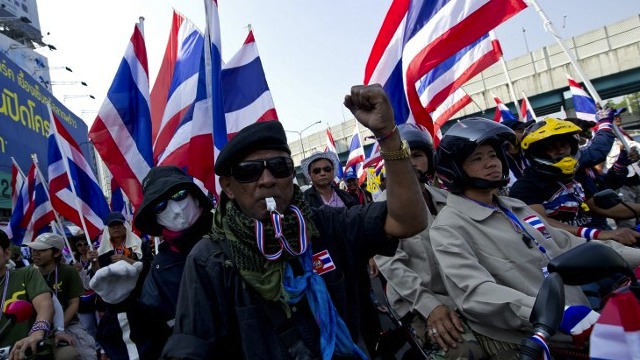 BANGKOK, Thailand – Polls opened in Thailand Sunday, March 30, to elect the upper house of parliament in a vote that could hold the key to the fate of the prime minister, who faces possible impeachment for negligence after months of street protests.

While the Senate is officially non-partisan, in reality the two main political camps are vying for control of the chamber in the absence of a functioning lower house following incomplete February polls.

The vote comes a day after tens of thousands of demonstrators took to Bangkok’s streets to demand the resignation of Prime Minister Yingluck Shinawatra, who has resisted massive pressure to step down despite months of rallies and a slew of legal moves against her.

“The polls have opened without any issue, there are no reports of trouble,” Suthep Promvas, deputy secretary of the kingdom’s Election Commission, told AFP.

In contrast, the February 2 vote for lower house lawmakers was boycotted by the main opposition party and widely disrupted by anti-government protesters — leading to its annulment earlier this month by the Constitutional Court.

With Thailand’s political crisis lurching towards its sixth month, the Senate polls have taken on added importance.

Experts say the elected portion — a narrow majority of the 150-seat chamber — could install many pro-government members to help bolster the administration in the face of looming legal challenges.

The other, unelected senators are appointed by institutions seen as allied to the anti-government establishment, such as the Constitutional Court and the Election Commission.

At a central Bangkok polling station a steady stream of voters arrived early Sunday to cast their vote, according to AFP reporters.

“Elections are best for democracy. Whatever we do, we must have elections,” said 65-year-old voter Amnuay Aransri.

Thailand has seen years of political conflict and rival street protests by opponents and supporters of Yingluck’s brother, fugitive former premier Thaksin Shinawatra who was ousted in a coup in 2006.

The billionaire tycoon-turned-politician, who clashed with the royalist establishment, fled overseas in 2008 to avoid jail for a corruption conviction, but he is seen as the de facto leader of his sister’s Puea Thai party.

Yingluck has faced five months of mass rallies demanding she step down to make way for an unelected interim government to oversee reforms.

Political violence, often targeting protesters, has left 23 people dead and hundreds wounded in grenade attacks and shootings in recent months, although the bloodshed has abated since the demonstrations were scaled back at the start of March.

Observers say the crisis now appears to be entering a crucial new phase.

Yingluck has been summoned to appear before the National Anti-Corruption Commission (NACC) by Monday to defend herself against negligence charges linked to a rice subsidy scheme.

The anti-graft body says she ignored warnings of corruption and financial losses in the flagship policy.

If indicted she would face an impeachment vote in the upper house that could result in her removal from office and a five-year ban from politics.

It means the balance of power in the Senate could be pivotal to her survival as premier.

“The Senate could actually begin to hasten the end of the Yingluck government within two weeks of the NACC decisions on whether to impeach,” according to Paul Chambers, director of research at the Institute of South East Asian Affairs at Chiang Mai University.

Yingluck’s supporters have warned they will not tolerate the dismissal of another democratically elected government, raising the spectre of more turmoil on the streets.

The pro-Thaksin “Red Shirts” are preparing to stage their own mass rally on April 5 in a show of support for the government.

Their street rallies against the previous government in 2010 resulted in street clashes and a military crackdown that left dozens dead.

An attempt by Yingluck’s party to push through a bill that would have made the Senate fully elected was blocked by the Constitutional Court, which deemed it unconstitutional. – Rappler.com