Mar 30, 2014 7:24 PM PHT
Facebook Twitter Copy URL
Copied
Eight ships – the largest number so far – and 10 planes from six countries were sweeping a vast expanse of the southern Indian Ocean off Australia for wreckage from the Malaysia Airlines Boeing 777 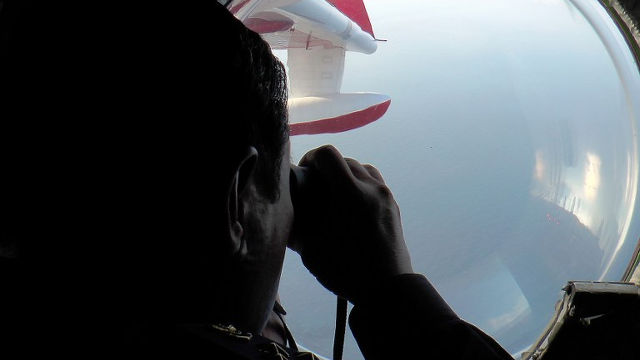 PERTH, Australia – Family members of Chinese passengers on board a missing Malaysian airliner arrived Sunday, March 30, in Kuala Lumpur – some angrily seeking answers and others seeking closure – as the search for the plane intensified.

Eight ships – the largest number so far – and 10 planes from six countries were sweeping a vast expanse of the southern Indian Ocean off Australia for wreckage from the Malaysia Airlines Boeing 777, as the hunt entered its fourth week.

Nothing has been seen of the plane or its 239 passengers and crew since it vanished off radar screens during a flight from Kuala Lumpur to Beijing on March 8.

Officials believe it went down in the sea thousands of miles off course.

Hopes of finding physical evidence of a crash have been repeatedly raised by debris sightings, then crushed as the items turned out to be random sea junk such as fishing gear.

As the hunt resumed 1,850 kilometres (1,150 miles) west of Perth, Australia said its former military chief Angus Houston would head a new unit to help in the search, which involves the militaries of seven nations — Australia, China, Malaysia, Japan, New Zealand, South Korea and the United States.

Prime Minister Tony Abbott said Houston would coordinate diplomatic contacts between search participants, and ensure families get all the information and help they need.

About two-thirds of those on board were Chinese and their loved ones have complained bitterly about what they see as Malaysia’s secretive and incompetent handling of the search. Kuala Lumpur has official responsibility for the operation.

Twenty-nine family members arrived Sunday in Malaysia to push for more answers, according to an official of the Malaysian Chinese Association which is providing support for them.

An airline official earlier put the figure at 39.

Many passengers are particularly incensed at the announcement on March 24 by Prime Minister Najib Razak that — based on detailed British analysis of satellite and other data — the plane had been lost at sea.

Clinging to shreds of hope, several desperate relatives refuse to accept this until wreckage is found.

“Tell us the truth. Give us our relatives back,” read one poster displayed Sunday by the Chinese relatives who traveled to Malaysia.

But not all were in militant mood.

At a regular briefing by Malaysian officials for family members in Beijing, a woman said not all the group members took the trip to put pressure on the Malaysian government.

“Some of the next of kin want to see for themselves the last place where their loved ones ever set foot,” she added, breaking down in tears.

Abbott said the Australian government “won’t rest until we’ve done everything we reasonably can to get those families and to get the wider community of the world a little more peace and a little more insight into exactly what happened”.

Authorities continued to pour resources into the operation, which is scouring an area about the size of Norway. An Australian ship with US-supplied equipment on board to locate the “black box” flight recorder was due to depart from Perth later Sunday.

Two Malaysian C-130 Hercules aircraft were to join the operation for the first time.

“Until items are picked up by a ship and assessed by expert investigators, no conclusions as to their origin can be made,” said New Zealand’s Air Vice-Marshal Kevin Short.

“It’s difficult and demanding work, scanning the ocean for small items, even flying low over the water at comparatively slow speeds. It requires total concentration.”

The search had moved Friday to a new sea zone after fresh data indicated the plane was flying faster than first thought before it is presumed to have run out of fuel and plunged into the sea.

But debris sightings by Chinese, Australian and New Zealand planes on Saturday did not yield any solid clues, compounding the frustration of families.

Malaysia believes the flight was deliberately redirected by someone on board, but nothing else is known.

A wreckage sighting could bring much-needed closure for relatives. And it might also help searchers find the main body of the plane and the flight recorder before its battery-powered “pinger” locator stops working.

The battery normally lasts one month. But Captain Mark Matthews — the US Navy supervisor of salvage and diving — said that while the pinger is certified for 30 days, it could last up to 15 days longer than that.

Aviation expert David Learmount said the disappearance of the plane — which he called a deliberate action by either the crew or the crew under coercion — may remain a mystery forever.

“I don’t think we’ll ever see either the black boxes or anything else,” he told Australia’s 60 Minutes TV programme.

“We will only recover what floats.”

Fifty Malaysians were on the plane and signs of mourning such as walls for leaving tributes are everywhere.

Teams and spectators at the Malaysian Grand Prix Sunday afternoon observed a minute’s silence for the victims. – Rappler.com