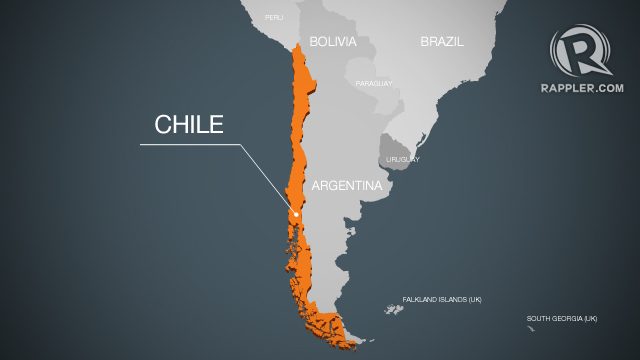 Chilean authorities – who registered the quake at 7.9 – and their Ecuadoran and Peruvian counterparts also issued a tsunami alert after the quake.

Chilean authorities ordered people along its vast coast to flee for higher ground. Ricardo Toro, of Chile’s National Emergency Office (Onemi), said the first waves of the tsunami had reached Pisagua, on the northern coast, providing no more details.

“Everyone along our coast should be alert and ready,” Ecuadoran President Rafael Correa said on Twitter.

In Peru, the southern coastal area was also put on alert, while in Lima roads along the coast were closed, said the mayor of the capital, Susana Villaran.

“This is a warning to all the precautionary measures to be taken by the population,” Colbert Ruiz, a commander with the navy, told the Agence France-Presse.

“An alert means being on watch but does not confirm the arrival of a tsunami,” he said. “So far, there is nothing.”

There were no immediate reports of damage or injuries after the quake, which was also felt in Bolivia. It was followed by aftershocks including one of 6.2-magnitude.

Chile is one of the most seismically active countries in the world, and a large earthquake has long been expected in the north of the country.

In its evaluation, the Pacific Tsunami Warning Center said in a statement: “It is not known that a tsunami was generated.

“An earthquake of this size has the potential to generate a destructive tsunami that can strike coastlines near the epicenter within minutes and more distant coastlines within hours.”

In February 2010, central and southern Chile were hit by a powerful earthquake of 8.8-magnitude followed by a tsunami that devastated dozens of towns.

The quake left more than 500 dead and $30 billion in damage to infrastructure.

The same coastal area has been the scene of numerous quakes in recent days. (read: Magnitude 6.7 earthquake rocks Chile: USGS)