US urges ASEAN armies to prepare for more natural disasters 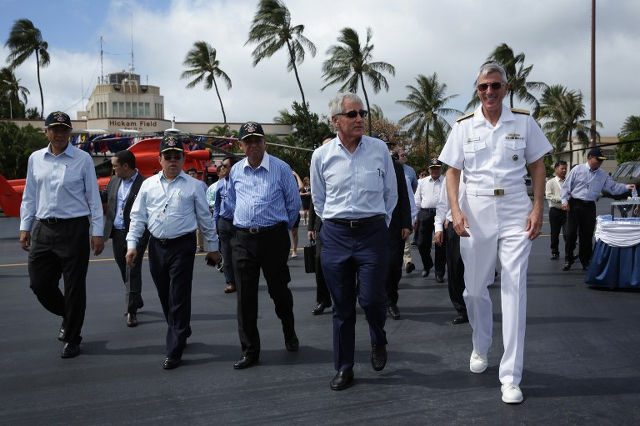 Pentagon chief Chuck Hagel and other top officials discussed the danger posed by rising global temperatures with ASEAN defense ministers in Honolulu, home to a major US weather research center that tracks sea levels and tsunamis in the Pacific Ocean.

“The more we can understand the science behind these natural disasters the more we can coordinate and communicate our efforts to help each other,” Hagel told his counterparts from the Association of Southeast Asian Nations.

Hagel said that cooperation among ASEAN militaries for humanitarian operations was steadily growing but that more collaboration was needed, as scientists predict more typhoons and other natural disasters will hit the region.

The head of the US Agency for International Development, Rajiv Shah, told the ministers that a report this week from a UN expert panel on climate change made clear that erratic weather would “wreak havoc on societies all around the world.”

“What that report also highlighted is that the Asia-Pacific is hit by more than 70 percent of all of these natural disasters,” Shah said. “And so you bear a greater brunt of the burden of those consequences.”

Shah said governments had to collaborate and rehearse for typhoons, flooding and other “extreme weather events” that are expected to become more frequent in coming decades.

The United States was “fully committed to working with and supporting you in this effort,” he said.

The ministers were given a tour of a new regional center for the National Oceanic and Atmospheric Administration, which houses scientists that track typhoons, tsunamis and rising sea levels across the Pacific.

The gathering of defense ministers marked the first time the United States had hosted an ASEAN meeting, and US officials said it was the latest example of a strategic “rebalance” aimed at countering China’s growing military might and assertive territorial claims.

Over the past decade, the US military has expanded its disaster relief operations in Asia, deploying ships and aircraft to carry out rescues and to deliver food, water and supplies.

US forces deployed in large numbers to the Philippines after Typhoon Haiyan struck the country in November, killing thousands.

Apart from saving lives, humanitarian operations offer Washington a way of cultivating trust among countries that are anxious about China but are wary of entering into an open alliance that might antagonize Beijing, analysts and officials say.

Hagel later led his counterparts on a tour of a new amphibious ship, the USS Anchorage, a vessel equipped with aircraft and vehicles that military officers say are well-suited for both combat and disaster relief efforts.

After the ASEAN talks wrap up on Thursday, Hagel is due to travel to Japan and China, amid tensions between the two Asian powers over disputed islands in the East China Sea.

As part of its “pivot” to Asia, the United States has vowed to move more of its warships and aircraft to the Pacific region, but budget pressures have threatened to slow down the shift.

Hagel, however, insisted the rebalance was well under way and would not be derailed, citing the deployment of a US Marine contingent in Australia and combat ships to Singapore as well as stepped up exercises.

“I think it’s pretty clear even with budget restraints – we’ll live with those – this is a priority. We’ll fulfill the commitments that we’ve made,” Hagel told reporters on Tuesday. – Rappler.com