Apr 3, 2014 11:16 PM PHT
Agence France-Presse
Facebook Twitter Copy URL
Copied
The queen's talks with the Argentine pope come a day after the 32nd anniversary of the start of the Falklands War between Britain and Argentina and come amid thorny Anglican-Catholic relations. 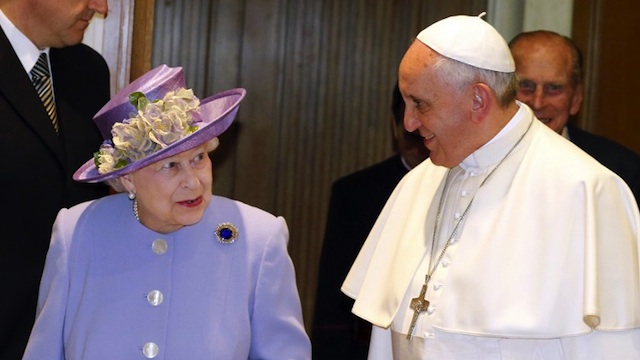 VATICAN CITY – Queen Elizabeth II met Pope Francis for the first time on Thursday, April 3 on a visit that coincides with the anniversary of the Falklands War and is also the 87-year-old monarch’s first foreign trip since 2011.

Dressed in lilac and clutching a bouquet of flowers, the queen smiled as she arrived at Ciampino airport, shaking hands with dignitaries on the red carpet.

She and her husband Prince Philip then had lunch with Italian President Giorgio Napolitano at the Quirinale Palace, where they were greeted with a military salute and crowds of supporters, some waving Union Jack flags.

Wearing one of her trademark hats decorated with flowers, and with a black purse over her arm to match her shoes, the monarch looked pleased to see the 88-year-old president.

The British royals were then seen arriving at the Vatican for the private audience with Francis in a room next to the Paul VI auditorium in the Vatican, with hundreds of people cheering as their car drove in.

The queen‘s talks with the Argentine pope come a day after the 32nd anniversary of the start of the Falklands War between Britain and Argentina and come amid thorny Anglican-Catholic relations.

But British officials have played down the prospect of any contentious issues on the agenda as the queen, the “supreme governor” of the Church of England, holds talks with the head of the world’s Catholics.

Britain’s ambassador to the Holy See Nigel Baker told Vatican radio that there had been “extraordinary” progress in Britain-Vatican and Anglican-Catholic relations since the Queen‘s coronation in 1952.

“She will want I think to understand from Pope Francis how he sees the role of faith in the world,” he said.

On the Falklands War, he said: “The Vatican has been clear with us, including in the last week and at a very senior level, that their long-standing position of neutrality on this issue remains in force”.

Francis will be the 5th pope the queen has met, starting with Pius XII in 1951 when she was still a princess.

The couple’s last foreign trip was to Australia in 2011, and the one-day visit will last only a few hours, without much of the pomp usually associated with royal travel to avoid tiring the aging royals.

While the talks are likely to be purely formal, Anglican-Catholic ties are an issue because of resentment in Britain over the Vatican’s move to bring conservative Anglican priests who dissented from the Church of England over female ordination.

But relations between Pope Francis and the Archbishop of Canterbury Justin Welby, the spiritual leader of the Church of England, are cordial and the two met in 2013 and are expected to hold talks later this year.

The Anglican church, which separated from Rome in the 16th century, has around 80 million faithful compared with the world’s 1.2 billion Catholics.

Another potentially divisive issue is over the British-ruled Falkland Islands — referred to in Argentina as the Malvinas — to which Latin America’s first pope has shown he is sensitive by once referring to them as “ours” before becoming pope.

He also said Britain had “usurped” the islands.

Francis last month met a group of 12 Argentine war veterans holding a placard for “peace in the South Atlantic” during a general audience in St Peter’s Square.

Argentine forces invaded the islands on April 2, 1982, but were forced to surrender in June after British forces recaptured them in fighting that left 649 Argentinians, 255 British and 3 islanders dead.

Following Pope Francis’s election last year, British Prime Minister David Cameron said he “respectfully” disagreed with the pope, after a referendum, also in 2013, in which 99.8% of Falkland Islanders voted in favour of remaining British.

“The white smoke over the Falklands was pretty clear,” he quipped — a reference to the smoke signal used by cardinals in the Sistine Chapel to show that a new pope has been elected. – Rappler.com