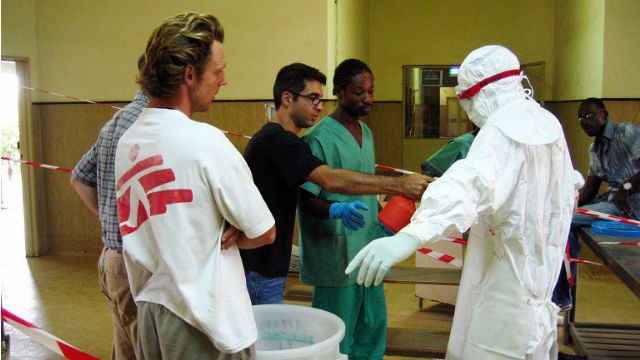 Facebook Twitter Copy URL
Copied
Ebola is historically rooted in central Africa, although it has also caused past outbreaks in Uganda to the east

PARIS, France – Virologists say they are deeply worried by the unprecedented Ebola epidemic in West Africa which has claimed more than 90 lives and may now also have struck north into the Sahel.

A rare but extremely dangerous virus, Ebola is historically rooted in central Africa, although it has also caused past outbreaks in Uganda to the east.

Except for a non-fatal case in Ivory Coast in 1994, when a lab researcher was infected while examining a dead chimp, Ebola had not previously been found in the west of the continent.

How it got there is puzzling experts.

The viral species now causing havoc is the Zaire strain of Ebola, which slays between 70 and 90 percent of those it infects and was last reported in the Democratic Republic of Congo in 2009.

“When I heard about the outbreak, my initial suspicion was that it could be the Ivory Coast species,” said Thomas Geisbert, an expert on haemorrhagic fevers at the University of Texas Medical Branch (UTMB).

“It turned out to be the Zaire species, which has never been connected with West Africa,” Geisbert told Agence France-Presse (AFP) by email.

“I am very concerned, because I think we still don’t know how the virus got into this region or the size of the boundaries of the affected area.”

Sylvain Baize, who heads France’s National Reference Centre for haemorrhagic fever, said the outbreak “is serious – by all accounts, it is not under control.”

“It’s worrying because it’s the first time Ebola has emerged as a human epidemic in west Africa,” he said.

Baize noted the “wide dispersion” of patients and also a case cluster in the Guinean capital, Conakry, which added to the complexity of tackling the epidemic.

Past outbreaks of Ebola have generally happened in remote rural areas, which makes their containment easier.

“That Ebola has found its way to densely-populated urban areas is a concern,” Jonathan Ball, a professor of molecular virology at England’s University of Nottingham said.

There is no vaccine or cure for Ebola. An epidemic has to be stopped by isolating suspected cases in ultra-clean conditions and quarantining those who had been in contact with them. This is a big task in countries where monitoring networks are weak and basic materials like isolation tents, rubber gloves, soap and bleach may be scarce.

UN agencies and the medical charity Doctors Without Borders, commonly known by its French initials MSF, are helping to fight the outbreak.

Since the start of the year, Guinea has reported 134 suspected cases of Ebola, of whom 84 patients died. In neighbouring Liberia to the south of Guinea, there have been 14 reported cases, seven fatal.

To the north of Guinea, the Sahel state of Mali said Thursday, March 27, it had three suspected cases. The patients had been isolated and were improving.

Fruit bat worriesBaize pointed to the fruit bat, suspected to be a natural “reservoir” where the Ebola virus holes up.

It can spread to animal primates and humans who handle infected meat – a risk given the informal trade in “bushmeat” in forested central and west Africa.

Among humans, the virus can spread through contact with infected blood, body fluids and tissue.

“The likeliest hypothesis is that the epidemic (in West Africa) is linked to the introduction of the virus with the fruitbat as an intermediary, although this still has to be confirmed,” Baize said. – Rappler.com