Afghans vote in presidential election as US troops exit 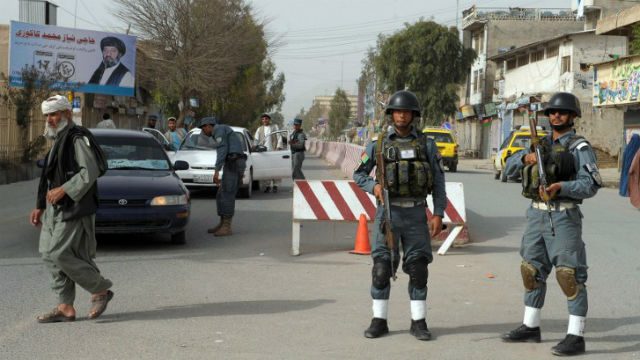 Facebook Twitter Copy URL
Copied
Afghanistan's third presidential election brings an end to 13 years of rule by Karzai, who has led the country since the Taliban were ousted in a US-led invasion in 2001.

Long queues formed outside polling stations in cities across the country, despite cold, wet weather, as voters cast their ballots at around 6,000 centers under tight security.

The Taliban have rejected the election as a foreign plot and urged their fighters to target polling staff, voters and security forces, but there were no major attacks reported in the early hours of voting.

The head of the Independent Election Commission (IEC) Ahmad Yusuf Nuristani told AFP turnout was better than expected, without giving figures, but lower in rural districts than cities.

“We have had reports of ballot papers running low in some areas and have ordered regional and provincial centers to supply extra material,” he said.

In Kabul, hit by a series of deadly attacks during the election campaign, hundreds of people lined up in the open air to vote despite the insurgents’ promise of violence.

“I’m not afraid of Taliban threats, we will die one day anyway. I want my vote to be a slap in the face of the Taliban,” housewife Laila Neyazi, 48, told Agence France-Presse.

Poll security was a major concern following the attacks in Kabul, most recently a suicide bombing on Wednesday that killed six police officers.

But a fatal blast was reported in Logar province, south of Kabul, where one person was killed and two wounded according to Mohammad Agha district chief Abdul Hameed Hamid.

IEC chief Nuristani said attacks or fear of violence had forced 211 of a total 6,423 voting centers to remain closed.

The day before the poll Associated Press photographer Anja Niedringhaus was shot dead by a police commander in eastern Khost province.

She was the third journalist working for international media to be killed during the election campaign, after Swedish journalist Nils Horner and Sardar Ahmad of Agence France-Presse.

Interior Minister Omar Daudzai said all 400,000 of Afghanistan’s police, army and intelligence services were being deployed to ensure security around the country.

Afghans have taken over responsibility for security from US-led forces and this year the last of the NATO coalition’s 51,000 combat troops will pull out, leaving local forces to battle the resilient Taliban insurgency without their help.

In the western city of Herat, a queue of several hundred people waited to vote at one polling station, while in Jalalabad in the east, voters stood patiently outside a mosque.

Voters also lined up in Kandahar city, the southern heartland of the Taliban, with some women among the crowd in contrast to the 2009 election when turnout was very low due to poor security.

The country’s third presidential election brings an end to 13 years of rule by Karzai, who has held power since the Taliban were ousted in 2001.

Around 13.5 million people are eligible to vote from an estimated total population of 28 million.

Polls were due to close at 4:00 pm, but the IEC extended voting by an hour during the day.

As well as the first round of the presidential election, voters will also cast ballots for provincial councils.

There is no clear favorite and if no candidate wins more than 50 percent of the vote in the first round – preliminary results for which will be announced on April 24 – a run-off is scheduled for late May.

Massive fraud and widespread violence marred Karzai’s re-election in 2009 and a disputed result this time would add to the challenges facing the new president.

Whoever emerges victorious must lead the fight against the Taliban without the help of more NATO troops, and also strengthen an economy reliant on declining aid money.

Relations fell to a new low late last year when Karzai refused to sign a security agreement that would allow the US to keep around 10,000 troops in Afghanistan to train local forces and hunt Al-Qaeda. – Rappler.com