Morsi due back in court over Egypt protest deaths 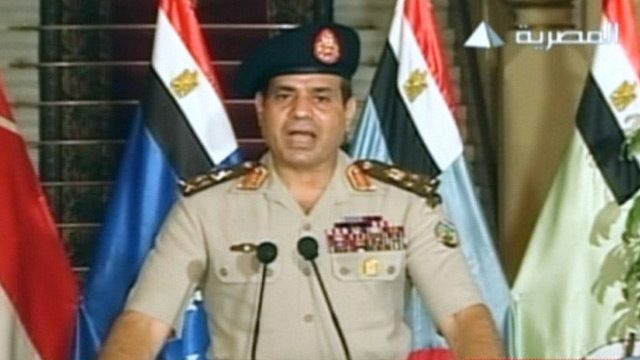 CAIRO, Egypt – Egypt’s deposed president Mohamed Morsi was due back in court on Saturday, April 5, over his alleged involvement in the killing of protesters in clashes during his rule.

The case is part of a relentless crackdown against Morsi and his Muslim Brotherhood since the military ousted him on July 3, ending a turbulent year in office.

Morsi and 14 co-defendants are charged with involvement in the killing of opposition protesters during clashes outside his Cairo palace in December 2012.

The resumption of the trial comes as Abdel Fattah al-Sisi, the former army chief who toppled Morsi, moved closer to replacing him in next month’s presidential election.

On Friday, Sisi’s campaign said he had already received thousands of signatures from supporters needed to register his candidacy.

Sisi, who is expected to easily win the May 26-27 election, is view by his supporters as a saviour for putting an end to Islamist rule after Morsi’s divisive single year in office.

But the Brotherhood and other Islamist groups accuse Sisi of leading a coup against Egypt’s first democratically elected president, unleashing strife that killed almost 2,000 people since July.

Morsi faces two other trials for espionage and militancy related charges, part of the worst crackdown on Islamists in decades.

He may be sentenced to death if convicted. – Rappler.com