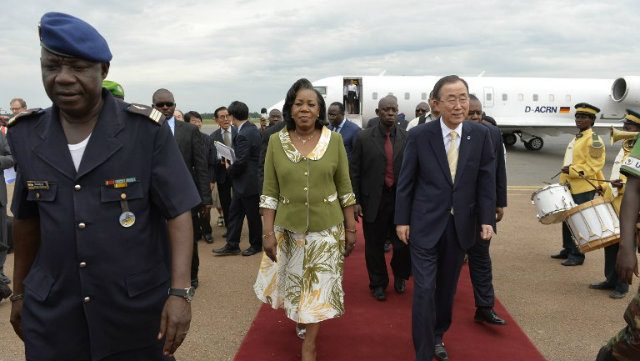 The UN secretary general will meet transitional president Catherine Samba Panza to discuss ways to end the deadly cycle of intercommunal violence that has laid waste to the country for a year and led senior UN figures to raise the specter of genocide.

Ban, who will spend just a few hours in Bangui before heading to Rwanda for the 20th anniversary of that country’s genocide, said ahead of his visit he was “deeply troubled by the appalling atrocities” against civilians in the Central African Republic.

He has called for a 12,000-strong UN force to be in place by the end of the year in the former French colony, where thousands have been killed since sectarian violence broke out a year ago.

He used an EU-Africa summit this week to urge the international community to provide the extra funds and troops needed for the force, which would take over from the some 2,000 French and 6,000 African Union soldiers already in place.

The secretary general – who one UN diplomat said was “terrified by the prospect of a new Rwanda” – will also deliver a speech to Central Africa’s transitional parliament to renew his call for an international mobilization.

Under pressure from Central Africa’s former colonial masters France, Ban unveiled plans in early March for a major operation in the troubled country that would include a civilian mission.

But some member states remain unconvinced, largely due to the high cost of such an operation to a United Nations already struggling to raise the funds needed to provide basic assistance to the population.

The force would be tasked with restoring order in the impoverished country – a huge undertaking, with about a quarter of its 4.6 million people displaced because of the conflict.

The operation would include a civilian mission charged with building a functioning state in the Central African Republic, which descended into chaos after a March 2013 coup by the mainly Muslim Seleka rebels.

The cost of the civilian operation, which would also help organize general elections due to be held by February 2015, has not been calculated.

Tens of thousands of Muslims have been forced from their homes in a vicious cycle of attacks and counter-attacks by the Seleka and the anti-balaka – mostly Christian militias set up to exact revenge on the former rebels.

French troops deployed in December to tackle the unrest, initially working to secure the capital before moving into the west of the vast country to control the major trade route to Cameroon.

French President Francois Hollande, who has spearheaded efforts to secure international support for the mission, said on Tuesday that the security situation in the country had “deteriorated” and that Muslims were being “directly targeted”.

The European Union said this week it was sending up to 1,000 troops, its first major ground operation in six years, to bolster the French and African peacekeepers in the country.

The deployment had been scheduled for late March but was delayed by insufficient troop and aircraft commitments from the EU’s 28 member states. – Rappler.com