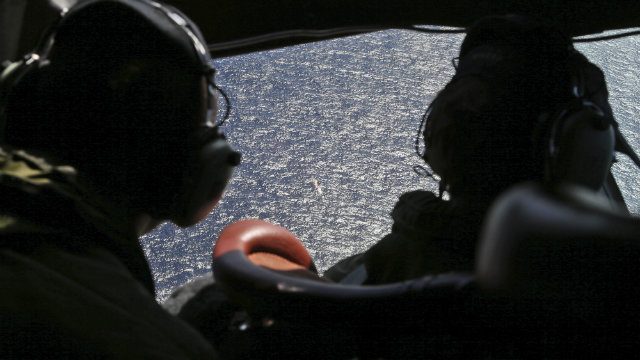 PERTH, Australia (UPDATED) – Australia on Sunday, April 6, sent planes and ships to investigate signals detected by a Chinese ship in the hunt for a missing Malaysian jet, saying they matched black box beacons and were an “important and encouraging lead.”

Angus Houston, the Australian head of the mission, said a second “ping” was also being scrutinised 300 nautical miles away in the Indian Ocean, as the one-month lifespan of batteries powering the beacons loomed. (READ: Signal in MH370 search ‘consistent’ with black box)

The Malaysia Airlines Boeing 777 with 239 people aboard vanished on March 8 during a flight from Kuala Lumpur to Beijing. (READ: Malaysia police say MH370 mystery may never be solved)

Houston said China’s Haixun 01 has twice detected an underwater signal on a frequency used for flight data and cockpit voice recorders – once for 90 seconds on Saturday and another more fleeting “ping” on Friday, April 6, a short distance away.

“This is an important and encouraging lead but one which I urge you to continue to treat carefully, we are working in a very big ocean and within a very large search area,” Houston told reporters.

“Speculation and unconfirmed reports can see the loved ones of the passengers put through terrible stress and I don’t want to put them under any further emotional distress at this very difficult time.” (READ: Painstaking underwater search for MH370 black box)

Britain’s HMS Echo and the Australian ship Ocean Shield – both equipped with black box locators – and Australian air force planes were being diverted to the area to help discount or confirm the signals, Houston said.

Ocean Shield was also investigating a signal it detected on Sunday in its current location, about 300 nautical miles north of Haixun 01, in waters far off Australia’s west coast.

Houston said the mission was taking both detections “very seriously” as time ticked down on the beacons’ battery life, though he described the Chinese finding as the more promising.

“I think the fact that we’ve had two detections, two acoustic events in that location, provides some promise which requires a full investigation,” he said.

The hunt for the jet was refocused on the southern end of the search zone Sunday after corrected satellite data showed it was more likely the plane entered the water there.

Houston said the Haixun 01 was already operating in that more southerly zone.

Some analysts greeted the acoustic detections with optimism, saying a 37.5kHz signal can only be transmitted by an emergency beacon. But others were sceptical and said it was vital to find supporting evidence. Houston said time was critical.Houston said Haixun 01 was in waters about 4.5 kilometers (nearly 3 miles) deep, meaning “any recovery operation is going to be incredibly challenging and very demanding and will take a long period of time” if the plane is found there.

Up to 10 military planes, two civil aircraft and 13 ships were scouring the remote waters on Sunday, concentrating on about 216,000 square kilometers (86,400 sq miles) of the Indian Ocean around 2,000 kilometers (1,250 miles) northwest of Perth.

Houston insisted that China was “sharing everything that’s relevant to this search” with the lead authority, and sidestepped questions over the Haixun 01’s location far from the other lead vessels in the search.

In Kuala Lumpur more than 2,000 people including relatives held an emotional mass prayer Sunday for the safety of the passengers.

Orange-robed Buddhist monks chanted mantras for almost two hours, before about two dozen tearful relatives left the event. Some family members still cling to hope in the absence of wreckage from the plane, and are desperate for leads. But Greg Waldron, Asia managing editor of Flightglobal publication, based in Singapore, said he was sceptical that the Chinese ship had picked up a pulse.

“There have been a lot of false leads in this story and we need to be extremely cautious with any information that comes,” he told AFP.

“I am very sceptical that the Chinese have found something so soon, given the vastness of the search area.”

Ravi Madavaram, an aviation analyst with Frost & Sullivan based in Kuala Lumpur, said most beacons used in the maritime and aviation industry had the same frequency and the ping could “likely” be from flight MH370.

“But the Chinese have not said exactly where the ‘ping’ is originating and where they detected it,” he said.

“The Chinese had previously given false alarms, so we need to verify from others before we can confirm that we have a ping.” (WATCH: The search for MH 370)

A criminal probe has focused on the possibility of a hijacking, sabotage or psychological problems among passengers or crew, but there is no evidence yet to support any of the theories. – Rappler.com