Facebook Twitter Copy URL
Copied
Several people were overcome with trauma, screaming and crying uncontrollably, with medical staff helping to carry them out and to provide counselling

KIGALI, Rwanda – Rwanda on Monday, April 7, held solemn commemorations marking the 20th anniversary of the genocide, with many survivors overcome with grief as they relived the trauma of the massacres that left nearly a million dead.

The events also bore reminders of festering anger, as a major diplomatic row broke out over renewed allegations of French complicity in the genocide.

In a speech at the national stadium, UN Secretary-General Ban Ki-moon admitted the international community was still wracked by the “shame” of having failed to act in Rwandaand making the same mistake a year later during the Srebrenica massacre in Bosnia.

“The shame still clings, a generation after the events.”

The well-planned and viciously executed genocide began late on April 6, 1994, shortly after Hutu president Juvenal Habyarimana was killed when his plane was shot down over Kigali. Roadblocks were set up, with Tutsi men, women and children of all ages butchered with machetes, guns and grenades.

At least 800,000 people, mostly Tutsis and some moderate Hutus, died in the killings.

Official mourning began three months ago with a flame of remembrance touring towns and villages across the small central African nation, and culminated on Monday when the torch arrived at the national genocide memorial – where the remains of a quarter of a million people are stored in vast concrete tombs.

President Paul Kagame lit a flame that will burn for 100 days, the length of time it took government soldiers and “Hutu power” militiamen to carry out their plan to wipe out the “Inyenzi” – a term meaning “cockroaches” that was used by Hutu extremists to designate minority Tutsis.

Wreathes were also laid, before ceremonies in Kigali’s football stadium where the UN chief, several African heads of state and top diplomats from Europe and the United States were gathered. 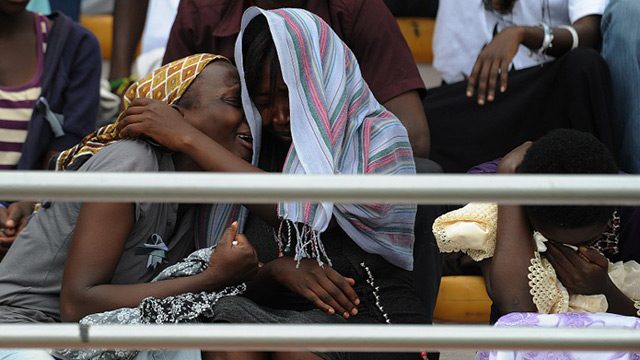 At the national stadium, survivors of the genocide recounted their memories of the killings and of survival. Several people were overcome with trauma, screaming and crying uncontrollably with medical staff helping to carry them out and to provide counselling.

“It is the day when the faces of all those I loved and died come back,” said Marie Muresyankwano, a mother in her thirties, adding she would watch events on television, but would otherwise spend time “with my own thoughts”.

“It is so hard for the people, because it opens mental wounds, hearing the testimonies of those who survived, they are reminded of what happened to them,” a Rwandan health ministry official said.

French officials, however, were absent, with French Justice Minister Christiane Taubira having pulled out over the weekend after Kagame repeated his accusation of French “participation” in the genocide.

Kagame said in an interview that French soldiers – who helped train the Hutu nationalist-controlled Rwandan army prior to 1994, as well as being accused of aiding the killers to escape – were both accomplices and “actors” in the bloodbath.

Rwandan Foreign Minister Louise Mushikiwabo also told France that it had to face up to the “difficult truth” over its involvement.

France’s ambassador to Kigali, Michel Flesch, told Agence France-Presse that he had been telephoned overnight and informed he was “no longer accredited for the ceremonies”. (READ: French ambassador barred from Rwanda genocide commemorations)

French authorities have repeatedly denied any direct involvement in the genocide, and, unlike former colonial power Belgium, has refused to apologise. In a statement, the French presidency said it “joins with the Rwandan people to honor the memories of all victims of the genocide”. 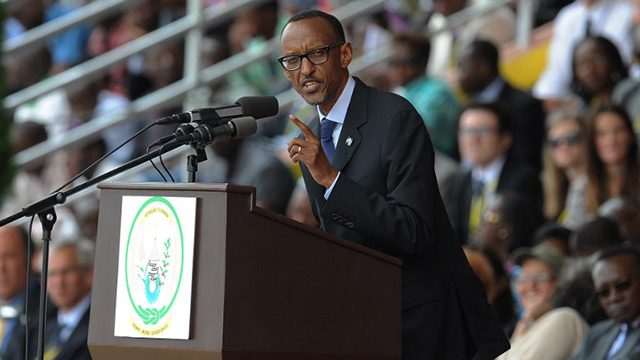 In his speech at the stadium, Kagame took another thinly-veiled swipe at France, saying it was impossible to “change the facts” and drawing loud applause.

But he said Rwandans should also celebrate the remarkable progress made in the past 20 years. (READ: 20 years on, Rwanda’s reconciliation goes on step by step)

Kagame has led Rwanda since his then-rebel force ousted Hutu extremists, steering a business-friendly and zero-corruption policy – although he has also come in for fierce criticism over his refusal to tolerate dissent and his alleged backing of rebels in neighbouring DR Congo.

“Today we have a reason to celebrate the normal moments of life, that are easy for others to take for granted. If the genocide reveals humanity’s shocking capacity for human cruelty, Rwanda‘s choices show its capacity for renewal,” Kagame said.

The UN chief has said the commemorations were a chance to remind the world to do all it can to ensure such crimes never happen again.

“Today, Syria is in flames and the Central African Republic is in chaos. The world has yet to fully overcome its divisions, its indifference, its moral blind spots,” he said.

But he asserted there was progress, and that “leaders and warlords alike face the growing likelihood of prosecution for their crimes”.

The UN was widely criticized in 1994 for only belatedly recognising that a genocide was in progress and therefore shirking its responsibility to intervene, but Ban said the UN had changed its way of operating as a result.

“I have sent my own signal to UN representatives around the world, My message to them is simply this: When you see people at risk of atrocity crimes, do not wait for instructions from afar. Speak up, even if it may offend. Act,” he said.