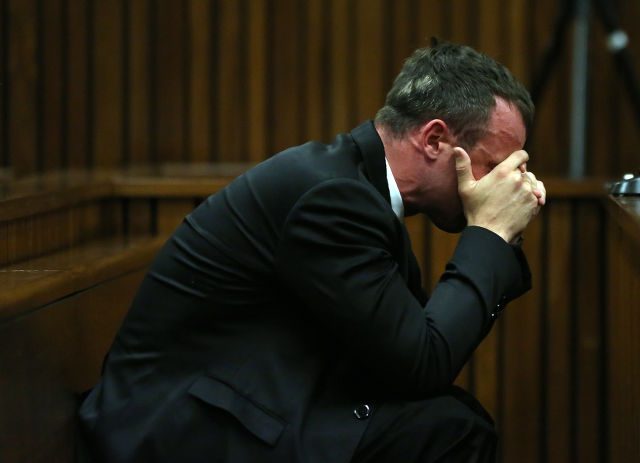 Facebook Twitter Copy URL
Copied
Oscar Pistorius offers a tearful apology to the family of Reeva Steenkamp as he goes on the stand
PRETORIA, South Africa – A tearful Oscar Pistorius apologized Monday to Reeva Steenkamp’s family, telling the court he had “terrible nightmares” since killing his girlfriend and often woke up smelling blood.

Sobbing and with his jaw trembling as he took the witness stand in his defense, Pistorius said he did not intend to kill his 29-year-old lover.

The Paralympic gold medallist is accused of premeditated murder, but claims he shot the model though a locked toilet door believing she was an intruder.

“I want to take this opportunity to apologise to Mr and Mrs Steenkamp,” he said, at times barely audible as he sobbed.

Pistorius said he was “trying to protect Reeva” on Valentine’s Day last year. “I can promise that when she went to bed that night she felt loved.”

“There isn’t a moment, or hasn’t been a moment since this tragedy happened that I haven’t thought about your family.”

“I can’t imagine the pain and sorrow and the emptiness that I’ve caused you and your family.”

In the tribunal Steenkamp’s mother June, flanked by other relatives, stared at him stony-faced during the apology.

She has sat through weeks of gruesome evidence, including brutal images of her dead daughter.

The athlete was speaking publicly for the first time about the events surrounding Steenkamp’s death.

Since that fateful night, “I’ve had terrible nightmares,” he said, adding: “I wake up at night smelling blood.”

He also said he has been on anti-depressants since the shooting.

Pistorius told the court that on one occasion after waking in the middle of the night he crawled into a cupboard because he was so scared.

Monday’s session seemed just as harrowing for the sprinter.

The court was forced to adjourn for the day ahead of schedule after defence lawyer Barry Roux said his witness was exhausted by a lack of sleep and the day’s ordeal.

“Well he does look exhausted, he sounds exhausted,” said Judge Thokozile Masipa, granting the defense an adjournment until Tuesday.

After five weeks of prosecution testimony, Monday was the first day of Pistorius’s defense.

‘Mother had a pistol’

Pistorius’s legal team used his testimony to put his actions on February 14, 2013, into context, sketching out what it was like for him growing up disabled in a crime-ridden country without his father.

“When I grew up we were exposed to crime. Housebreakings, family members being assaulted and hijacked,” said the athlete, recounting burglaries at his own home and his father’s.

“My mother had a lot of security concerns. We grew up in a family where my father wasn’t around much. She would often get scared at night, she would phone the police,” he said.

“My mother had a pistol,” he added. “She kept her firearm in a padded bag under her pillow.”

Sheila Pistorius died when her amputee son was aged 15.

He also testified about his vulnerability when he is not wearing his prosthetic legs.

“I don’t have balance on my stumps,” he said.

The defence also spent time on a character sketch of a deeply religious man who loves animals.

“I put a lot of faith in the Lord to be where I wanted to be,” he said about a revival of his faith in 2012, describing meeting the equally religious Steenkamp as a “blessing”.

“We would pray at night,” he said.

Cape Town-based criminal advocate William Booth said much will depend on how Pistorius stands up to cross-examination – which could come as soon as Tuesday.

“Oscar’s evidence can only be properly assessed once he’s been cross-examined,” Booth said.

In the 5 weeks since the trial began, Pistorius has appeared fragile and sometimes annoyed, frequently crying in court.

He was physically sick when the gruesome details of Steenkamp’s death were discussed.

A key question will be, “Is he emotionally stable to testify if he’s breaking down all the time?” Booth said.

“One would rather have him in a better state of mind when he testifies.”

Pistorius has hired an extensive team of forensic experts, including an American animation firm that will visually depict the crime scene using three-dimensional computer-generated images.

The experts will have to cast doubt on the state’s version of events, including testimony from witnesses who said they heard a woman screaming on the night of the killing, which would show Pistorius knew his target was Steenkamp.

His lawyer Barry Roux said he will call 14 to 17 witnesses in his case to testify on ballistics, urine emptying, damage to the toilet door, sound, and “disability and vulnerability.”

The trial is slated to run to at least mid-May. – Rappler.com