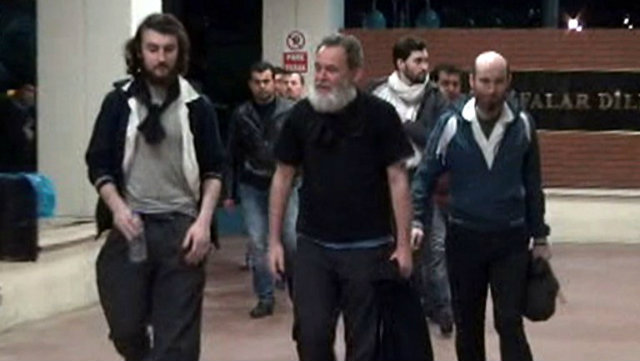 PARIS, France – Four French journalists taken hostage in Syria arrived home on Sunday, April 20, to an emotional reunion with family and colleagues after spending 10 months in captivity in the world’s most dangerous country for the media.

French President Francois Hollande said it was “a day of joy for France” as he met the four men at military airbase outside Paris where they touched down early Sunday.

Hollande said France was “proud” to count the freed journalists among its citizens, and to have secured their release, but cautioned that “there are still hostages being held in Syria because they are journalists.”

Edouard Elias, Didier Francois, Nicolas Henin and Pierre Torres were captured in two separate incidents in June last year while covering the conflict in Syria and freed over the weekend.

Looking thin and tired but overjoyed to be home, they hugged relatives and colleagues waiting on the tarmac at Villacoublay air base southwest of Paris.

“It was a long haul, but we never lost hope,” said 53-year-old Francois in an emotional speech to the media after arriving at Villacoublay.

“From time to time, we got snatches of information, we knew that the world was mobilized,” said Francois, a highly respected and experienced war reporter for Europe 1 radio.

Thanking the French diplomats and secret services who worked to secure the hostages’ release, Francois said he was moved by the “degree of mobilization, this outburst of solidarity, this generosity that the French people have when it comes to their media, their hostages, their fellow citizens abroad.”

The men arrived in France early Sunday on a military plane from Turkey, before being flown by helicopter to Villacoublay, where they will undergo medical checks.

Hollande said on Saturday they were “in good health despite the very challenging conditions of their captivity”.

Turkish soldiers found them abandoned in no-man’s land on the border with Syria overnight Friday to Saturday, wearing blindfolds and with their hands bound.

The Turkish soldiers initially thought they were smugglers, but took them to a police station in the small town of Akcakle near the border when they realized they were speaking French.

Around 30 foreign journalists covering the Syrian civil war have been seized since the conflict began in March 2011, and many are still missing.

Francois and photographer Elias, 23, were taken north of the main northern Syrian city of Aleppo on June 6.

Henin, a 37-year-old reporter for Le Point magazine, and freelance photographer Torres, 29, were seized two weeks later also in the north of the country, at Raqqa.

“FREE!!!” Henin wrote on his Facebook page. “A huge thank you to everyone. I am very moved by your messages. Can’t wait to see you again. I am ecstatic to be able to rejoin my wonderful family.”

The reporter said he had managed to escape once, but was recaptured.

“I took the biggest risk three days after my kidnapping, because I escaped. I spent a night in freedom running through the Syrian countryside before my kidnappers caught up with me,” Henin told France 24 television.

Describing the captors as “a group that claims to be a jihadist movement”, the journalist said he was transferred to about a dozen different sites during the months spent in captivity.

Recounting the last hours before he was freed, Henin said: “Usually we were not very well fed. But the guards came to our cell and brought us a meal that was better than the usual, and even asked if we wanted to eat more, which never happens.

“So we thought: something’s going on. And quite rightly, as we hardly had any time to eat before they came in the next minute to say ‘let’s go, we’re going to the border'”, he recalled.

The ex-hostages return to an outpouring of joy and relief from family and colleagues.

“We don’t know what to say, we are very happy obviously, but we are completely overwhelmed,” Elias’s grandmother Josette Dunand told Agence France-Presse.

The head of Europe 1 Denis Olivennes described emotional scenes in the office.

“It is an immense joy, we are in tears,” he said. “We have endured 10 months of terrible anxiety and anguish. Now they are freed, I have no words to describe how it feels.”

There had been some indication that a release was possible in recent days.

“We were told a few days ago that they had a window of opportunity, but we have learned not to get our hopes up,” said Fabien Namias, chief executive of Europe 1.

The four men’s liberation comes weeks after two Spanish journalists taken hostage in Syria in September by an Al-Qaeda-linked group called the Islamic State of Iraq and the Levant also walked free.

Among those still being held in Syria are US journalist James Foley, who had been working for Global Post, Agence France-Presse and other international media and went missing in November 2012, and Austin Tice, who disappeared in August the same year.

The New-York based Committee to Protect Journalists said in a report Wednesday that Syria was the most dangerous country for journalists, highlighting the rising number of “targeted killings” of reporters. – Rappler.com