May 19, 2012 1:54 PM PHT
Agence France-Presse
Facebook Twitter Copy URL
Copied
At the end of the operation, 14 victims were identified and 35 body bags filled with victims' remains were recovered 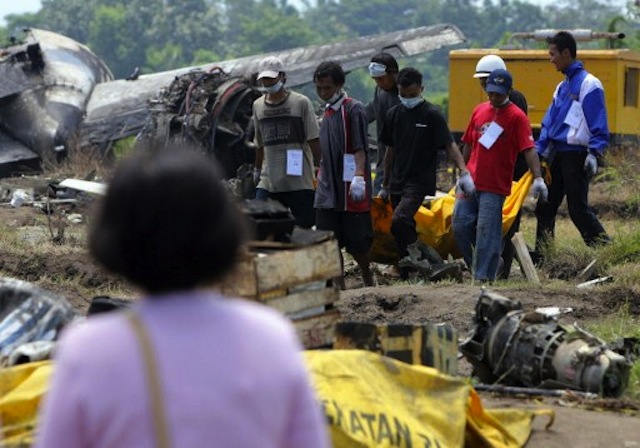 JAKARTA, Indonesia – Indonesian officials have called off the search for victims of a Russian jet crash, the operation’s head said Saturday, May 19, as experts continue their probe into why it flew into a dormant volcano.

The new Sukhoi Superjet 100 slammed into Mount Salak, south of the capital Jakarta, on May 9 with the loss of all 45 passengers and crew on board. Body parts were flung over dense forest and down a deep ravine.

As experts analyze data from the plane’s cockpit voice recorder for clues as to why it crashed during a demonstration flight, officials called off the search for victims.

“The national rescue agency called off the search on Friday as we’d recovered as many body parts as we could,” Colonel Anton Mukti Putranto told AFP.

“By the end of the operation, we sent 35 body bags filled with victims’ remains to Jakarta for identification and 4 more bags containing their belongings like wallets carrying ID cards.”

A DNA identification process is still under way at the Kramat Jati Police Hospital in Jakarta.

“We can confirm that we have identified 14 victims — 12 Indonesians and two foreigners. Nine were men, five were women,” hospital chief Agus Prayitno told reporters.

The promotional flight aimed at touting the new jet to booming Indonesia was carrying mostly Indonesian airline officials as well as eight Russians. A US citizen and a French national were also on board.

Putranto said special forces, who located the plane’s cockpit voice recorder during the week, would continue to search for the aircraft’s other black box, the flight data recorder.

Investigators said it would take around 3 weeks to analyze the voice recordings, which they hope will help explain how a veteran pilot flew the aircraft into Mount Salak, which stands 7,200 feet (2,200 metres) tall.

A team of Russian experts will stay at Mount Salak to clear up the wreckage and gather information for the investigation, Putranto said. – Rappler.com