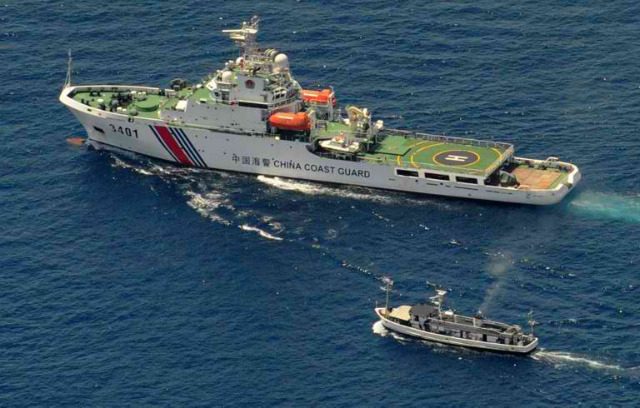 Facebook Twitter Copy URL
Copied
The Code for Unplanned Encounters at Sea, which was agreed Tuesday, April 22, would reduce the potential for "situations to arise that could lead to conflict in busy sea lanes", the state-run China Daily said

BEIJING, China – China, the United States, Japan and more than a dozen other Asia-Pacific countries have signed a naval agreement aimed at ensuring miscommunication between ships at sea does not escalate into conflict.

The Code for Unplanned Encounters at Sea, which was agreed Tuesday, April 22, in the eastern port city of Qingdao, would reduce the potential for “situations to arise that could lead to conflict in busy sea lanes”, the state-run China Daily said.

China is embroiled in a series of territorial disputes with neighbors in the South and East China Seas which have frequently led to military jets being scrambled but not open conflict.

Beijing also feels threatened by an increase in US naval power in the region.

In December, a US-guided missile warship, the Cowpens, had to make a sharp turn to avoid colliding with a Chinese naval ship that cut in front of it, according to the Pentagon.

Gary Li, an analyst with the consultancy IHS, described the agreement as “the ideal thing for China to grab hold of – the rules of the road.”

“It is not some kind of comprehensive ‘covers all’ code of conduct. It is a mechanism towards de-escalation,” he told the Agence France-Presse.

“If anything happens again during one of these confrontations, or they run into the US Navy, which they undoubtedly will do more frequently in the next few decades as China builds up more blue water capability.

“So I see it coming into play more crucially in these moments, so you will not have a repeat of the US Cowpens, for example.”

The agreement would allow redress for China if it was blamed for an encounter, Li said, adding that China would also benefit from the agreement being “flexible”, given that it is not legally binding.

The agreement was passed at the Western Pacific Naval Symposium, a meeting held every two years of more than 20 countries including the US as well as Japan and the Philippines, which are locked in bitter disputes with China over contested territory.

The US is focusing greater attention on Asia and has boosted its military presence in the region, a move that has alarmed China and emboldened its rivals.

China meanwhile has rapidly modernized its military. Its first aircraft carrier, the Liaoning, went into service 18 months ago, and its forces outnumber its main rival Japan in virtually every area, the International Institute for Strategic Studies said in a February report. – Rappler.com