Obama: one eye on Asia, another on global turbulence 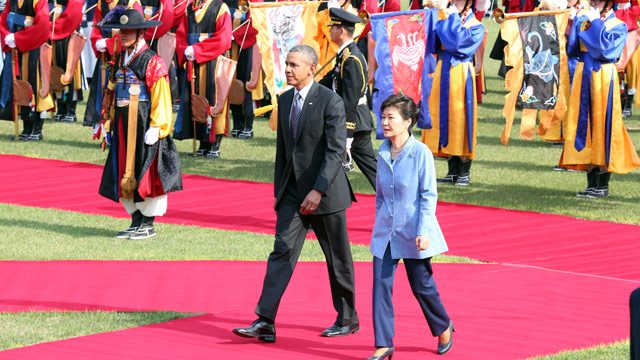 Facebook Twitter Copy URL
Copied
Foreign policy crises are chasing Barack Obama around Asia, drawing his attention from a key region and providing fodder for domestic critics who see him as a toothless leader outmaneuvered by foes like Russia's Vladimir Putin

SEOUL, South Korea – Foreign policy crises are chasing Barack Obama around Asia, drawing his attention from a key region and providing fodder for domestic critics who see him as a toothless leader outmaneuvered by foes like Russia’s Vladimir Putin.

To put in proportion the problems piled on the US president’s plate, consider that a potential North Korean nuclear test and boiling tensions between his top Asian allies and China don’t even top his list of foreign policy headaches.

Given global turmoil, the US president was never likely to be able to keep both eyes on Asia during this week’s trip.

And so it has proven, as a Cold War-style showdown with the Kremlin and a crumbling Middle East peace process challenge Obama‘s chosen legacy-building narrative of locking in America as a preeminent Pacific power.

“I don’t have the luxury of choosing just one problem at a time,” Obama told a South Korean journalist who wondered if his attention on North Korea was being diverted by events in Ukraine.

Crises have been Obama‘s constant companion since he arrived in the White House in 2009 during the worst financial crisis since the Great Depression.

If his current four nation odyssey – itself a make-up for a trip that fell prey to domestic political dysfunction last year – is a guide, crises will also usher him out of office in two-and-a-half years’ time.

On Friday night, April 25, Obama rushed from dinner with South Korean President Park Geun-Hye to convene a conference call with European leaders aimed at toughening sanctions on Russia over Ukraine.

Then North Korea unveiled late Friday its latest headline-grabbing seizure of an American citizen who was detained at immigration.

Big chunks of Obama‘s news conferences with Park and Japanese Prime Minister Shinzo Abe were devoted to long explanations of his plans to thwart Putin or vows to stick with Middle East peacemaking.

“That was a long statement, I must say,” Park chided, after a detailed Obama answer on Ukraine on Friday.

White House officials would dearly like some glowing US media reviews of the tour. But the president’s case was not helped when he left Japan without a market access deal in a dispute blocking the Trans Pacific Partnership trade pact – a project that would adorn his legacy of “rebalancing” American power towards Asia.

The TPP’s importance was clear when senior officials rushed to set the narrative on Air Force One as Obama flew to Seoul, insisting a “breakthrough” pointing the way to an eventual resolution had been charted in round-the-clock talks in Japan.

The prevailing media frame of Obama‘s second term is of a diminished leader buffeted by political winds he can no longer redirect and world events crowding his Asian tour deepened that perception.

CNN blared: “Obama‘s tough Asian tour” in an on-screen graphic. Politico Playbook, a popular tip sheet for Washington insiders, asked readers: “Be honest, did you even know Obama was away?”

On one level, Washington chatter matters little to Obama, who never has to face voters again.
And while it may be ignored back home, Obama has sent clear messages of his intent to defend Japan – to elite audiences in Tokyo and Beijing.

Obama‘s visit is getting big play in Asian media – dominating front pages wherever he goes.
People close to Obama say he can’t bear the short-termism and frivolity of Washington politics.

In Asia by contrast, he is playing the long game with his legacy on the line: but his time is short and leaders like China’s President Xi Jinping, Abe, and Park will likely still be around after he is pensioned off in January 2017.

But the reviews back home do matter to Democrats desperate to cling onto the Senate – the president’s approval ratings are a critical driver of their prospects at mid-term elections in November.

Republicans and media critics have jumped on Obama‘s foreign policy woes to sketch a caricature of a president who blinked on striking Syria and now sees adversaries ready to step over his red lines all over the world.

“President Putin is only emboldened by empty rhetoric, so it is time for the administration to back up their talk by immediately putting in place tough sanctions against Russian banks and energy companies,” said Senator Bob Corker, one of Obama‘s more measured Republican critics.

Obama is tired of all the “weak president” buzz and a perception that only military force provides a “definitive answer” in foreign policy.

“You would think, given that we’ve just gone through – a decade of war, that that assumption would be subject to some questioning,” he said. – Rappler.com