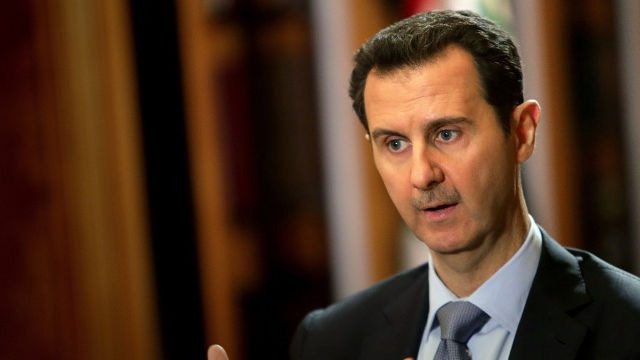 Facebook Twitter Copy URL
Copied
Despite being Syria's first multi-candidate presidential election, it has already been criticized by the opposition and much of the international community as a "farce"

DAMASCUS, Syria – Syrian President Bashar al-Assad has registered to run in next month’s presidential vote, which is expected to return him to power despite the grinding conflict, the parliament speaker announced Monday, April 28.

The election will be Syria’s first multi-candidate presidential vote, after changes to the constitution. But it has already been criticized by the opposition and much of the international community as a “farce”.

The government has not explained how it will hold a vote in a country gripped by a brutal war that has killed more than 150,000 people and with large swathes of territory beyond regime control. (READ: Deaths, refugees and damage: Syria’s crisis in figures)

Speaking at a session of parliament, speaker Mohamed al-Lahham read a letter from Assad.

“I, citizen Bashar Hafez al-Assad, wish to present my candidacy for the post of president of the republic,” the document said.

A posting on the presidency’s official Facebook page quoted Assad as calling on supporters of different candidates to express themselves through the ballot box.

“Those who wish to express their joy and support for any candidate for the presidency should do so in a responsible, patriotic way, first, and secondly, through the ballot box in a timely fashion,” he said.

“I call on all Syrian citizens to refrain from firing in the air in joy, whatever the occasion might be, especially as Syria will be having its first election in modern history.” (READ: Syria’s Assad says war turning in regime’s favor)

Assad is expected to sail to victory against the 6 other candidates who have so far announced their runs, one of them a woman.

They are all largely unknown, except for one member of parliament, and it remains unclear how they will angle their campaigns against Assad.

Syria’s parliament has 250 members, 160 of who belong to the ruling Baath party. Candidates must receive the support of 35 MPs to make their run official.

On Monday afternoon, state television showed MPs streaming into Lahham’s office to designate their support for their favourite candidate, after Assad’s candidacy was announced.

Assad became president after his father Hafez died in 2000 and will be competing in the first multi-candidate elections for the post, after a constitutional amendment did away with a referendum system.

Electoral rules prevent those who have lived outside Syria for the past decade from competing, effectively ruling out participation by the opposition-in-exile.

With nearly half the population displaced, inside and outside the country, it is unclear how many Syrians will be able to vote.

The head of the electoral commission also said Monday that Syrians who left the country “illegally” would not be allowed to vote.

Many of the approximately three million Syrians who have fled the country did so through by being smuggled across the border into neighbouring countries, or crossing through rebel-held border posts.

The main opposition National Coalition has criticized the elections as a “farce”, while the US embassy in Syria – closed since 2012 in protest over the regime’s violations – said on Twitter: “Staged elections since the 70s – an Assad family legacy.”

A citizen journalist and activist in Aleppo, Mohammad al-Khatib, told Agence France-Presse (AFP) via the Internet: “Just like the voting has always been fixed before, it will be fixed now too. This election is just a show. The people running against Assad are not real opponents. Bashar will win. And the revolution will continue.”

Electricity had been out ever since the opposition cut high-tension power lines to try to pressure the regime to end aerial raids on the rebel-held east of the city.

The jihadist Al-Nusra Front had promised earlier in the day to restore power to the regime-held areas.

Rights group have decried the use of the highly destructive, improvised bombs saying they cause indiscriminate civilian casualties.

The Assad regime has increasingly employed them over rebel-held parts of Aleppo, where fighting between the government and rebels has stepped up in recent weeks.

Hundreds of people, mainly civilians, have been killed in a nearly five-month aerial offensive against Aleppo.

More than 150,000 people have been killed in the Syrian conflict since March 2011, according to the Observatory. – Rappler.com