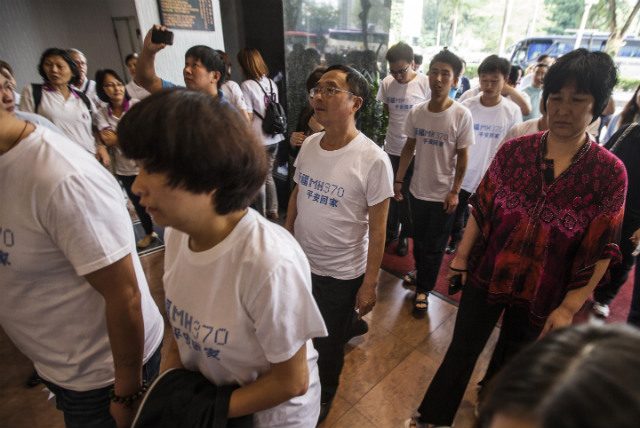 KUALA LUMPUR, Malaysia (UPDATED) – Malaysia Airlines will cease to provide hotel accommodation for relatives of missing flight MH370 passengers by May 7, the airline said on Thursday, May 1.

The Malaysian flag carrier has provided hotel accommodation for relatives in a number of countries – most of them in Malaysia and China – where it provided them periodic updates on the situation since shortly after the flight mysteriously disappeared on March 8.

But relatives’ tempers have repeatedly flared, particularly at the Lido Hotel in Beijing where Chinese families have regularly lashed out at officials from the Malaysian government and the airline over their inability to explain the plane’s disappearance.

“Instead of staying in hotels, the families of MH370 are advised to receive information updates on the progress of the search and investigation and other support by Malaysia Airlines within the comfort of their own homes, with the support and care of their families and friends,” the airline said in a statement.

“In line with this adjustment, Malaysia Airlines will be closing all of its family assistance centers around the world by 7 May 2014.”

Wen Wancheng, whose son was on the flight, said that relatives have come under pressure from time to time to leave the hotel and go back home, but was adamant that they would refuse.

“Today MAS brought this up officially and we’re not going to accept it,” he told Agence France-Presse (AFP), referring to the airline.

“They made the commitment in March that they wouldn’t drive us out of the Lido until any wreckage was found,” he said.

The government-controlled carrier also said it would soon make advance compensation payments to the next-of-kin of the 239 people onboard the plane, part of a final package to be agreed upon later. (READ: Planes head home as MH370 search scaled back)

It did not specify the amounts.

Wen, the Chinese relative, expressed concern about the payments.

“It has to have a legal basis,” he said. “Is this for relatives’ mental damages or the casualties of our family members onboard?”

About two-thirds of those aboard the missing plane, which vanished from radar en route from Kuala Lumpur to Beijing on March 8, were Chinese nationals.

The airline also had provided psychiatric support at hotels for families trying to cope with the tragedy.

The carrier said it would establish centers in Beijing and Kuala Lumpur to provide “follow-up support and services” but gave no further specifics. (READ: What happened to Malaysia Airlines flight MH370?)

A Malaysia Airlines spokeswoman declined to offer further details when contacted by AFP.

The cut-off of accommodation is likely to upset some family members who continue to demand answers from the airline and Malaysian government.

The airline said last week that 10 of its staff were held against their will for more than 10 hours at the Lido Hotel by angry relatives.

Hotel-staying next-of-kin could not immediately be reached for comment.

The plane is believed to have inexplicably diverted from its course and crashed in the Indian Ocean.

However, a multi-nation search for plane wreckage has failed to find any evidence despite weeks of looking. (READ: Australia plans to widen fruitless MH370 search) – Rappler.com