MANILA, Philippines – Barely a week after two Southeast Asian countries went against superpower China over maritime conflicts, regional chiefs of police converged in Manila to discuss a multitude of transnational crime – among them, “maritime fraud.”

Present during the 34th ASEAN Association of Chiefs of Police (ASEANAPOL) Conference was China’s director of International Cooperation Department Liao Jinrong of the Ministry of Public Security. 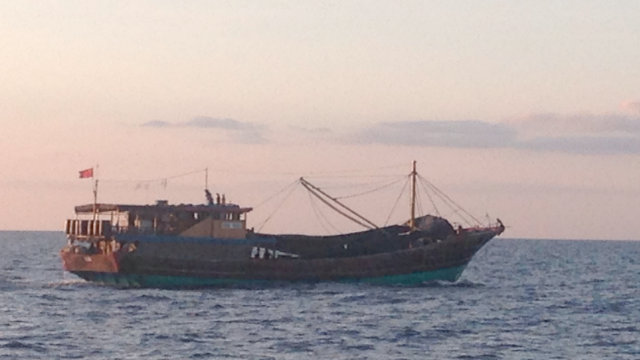 On the sidelines of the conference opening, PNP chief Alan Director General Alan Purisima said China – along with Australia, Japan, South Korea, New Zealand, Interpol and the ASEANAPOL Secretariat – will take part in the 4-day conference only as dialogue partners.

On May 6, the PNP Maritime Group arrested 11 Chinese and 5 local fishermen in possession of over 500 dead and alive turtles at the Hasa-Hasa Shoal (Half Moon Shoal), located about 60 nautical miles off Palawan. The shoal is well within the Philippines’ 200-nautical mile Exclusive Economic Zone (EEZ).

Questions from the media about the arrest of the fishermen were left unanswered by China’s police representative.

Nine of the 11 Chinese fishermen were charged for violating laws against catching and poaching protected species, despite China’s demand that the fishermen be freed immediately.

Purisima, however, downplayed speculation over the discussion of maritime fraud during the conference.

“Yung maritime fraud, lahat pag-uusapan. Walang bago. Ang bago ngayon ang observer na Russia as approved last year,” he told reporters. (We’ll discuss everything including maritime fraud. Nothing new. The only new thing this year is the inclusion of Russia as an observer.)

All 10 members of the Association of Southeast Asian Nations or ASEAN are represented in the conference, including Vietnam, which sounded the alarm after Chinese ships protecting a deep-water drilling in disputed waters allegedly used water cannons to attack Vietnamese patrol vessels, injuring 6.

“Our patience is limited. If they (China) continue to hit us, we will have to take self-defense measures in return,” Vietnam maritime police deputy commander Ngo Ngoc Thu said after the incident. (READ: Vietnam sea spat part of China’s larger strategy: experts)

A recent communiqué issued by the 10 ASEAN members on Sunday, May 11, expressed “serious concern” over the China-Vietnam maritime row.

According to the PNP Public Information Office, the following issues will be tackled by the 10 ASEANAPOL members, as well as their partners and observers: